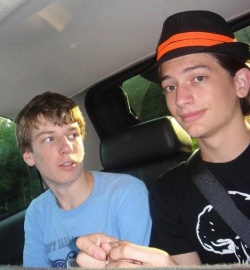 A picture of the two main tipsters involved, Jas and Aris.

Mother Lover is a SNL skit done by Justin Timberlake and Andy Samberg as a sequel / followup to their hit "Dick in a Box." The skit is about how they both forgot to get gifts for their mother's on Mothers Day. So, they decide to offer each other as sexual partners as a gift. (A link to the original: [1])

As you can clearly see by the skit, the song is far from a TIPropriate song. However, at the University of Georgia term II, 2010 talent show two guys, Aris Santas and Jas Rempala, decided to audition using the song. With the help of Andrew Sanchez on guitar and Brian Taylor keeping rhythm, they were accepted as an act. The only comment was (made by Tessa) about language, which they promised to self-edit. The audition included the first verse and a chorus.

Perfectly enough, Mother Lover was the last act in the talent show before the 4th years went to do the TIP Anthem. They made it through two verses and two choruses before the RC's were practically rushing the stage and the MC's were taking the microphones from the singers. They received a standing ovation from almost every tipster present and later did a encore presentation of the song in the lobby of Myers. If you would care to see this rendiion, (or rather, fragments of it) follow the link: http://www.youtube.com/watch?v=RrBr_F5XGdc