A long, long time ago, (East II 2010) many TiPsters can still remember when the dulcet tones of Chad Kroeger echoed across the quads. In a bold attempt to reclaim the Llama, several fourth years (definitely not Alli Schloeman, Sam Jamison, and Tricia Johnson) decided to commit the most heinous example of noise pollution ever- the blasting of Nickelback from six different dorm rooms throughout a full day of classes. The move, designed to make the RCs' ears bleed, was cut short when the TiPsters arrived to signs threatening to confiscate all speakers and iPods on campus. 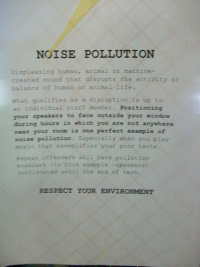 The signs posted by the RCs to stop the noise pollution. RC Terricia confirmed on opening day of East II 2011 that she had indeed written and posted these signs, and that the document remains in her Google Docs
Retrieved from "http://www.tipwiki.net/index.php?title=Nickelback_for_the_llamaback&oldid=24188"