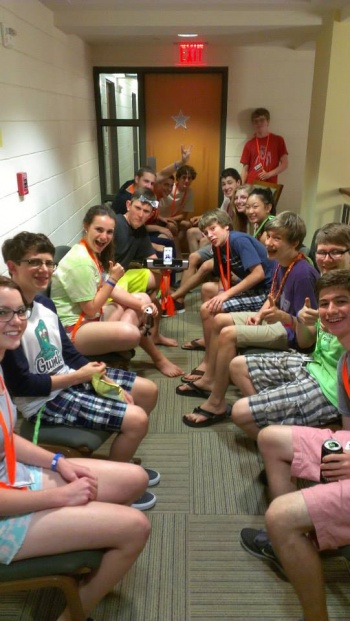 A Rock Party in progress on the balcony

A Rock Party is when a large group of TiPsters take the rocking chairs out of their rooms and to the same location, such as the second-floor Balcony. Loud music is often involved, with songs such as We Will Rock You and I Wanna Rock are common, due to their inherently punny nature. An attempt of rocking in unison is almost always made, and just as often fails.

The Rock Party originated on the last Wednesday of UGA Term 2, 2012. Cal Stephens, for little actual reason, brought a rocking chair out of his room to Garret Botkin and Michael Stevens' room, where he preceded to rock back and forth patiently and silently. This drew some odd looks, but eventually people began to join him until there was a line of people rocking down the hallway. They were forced to dissolve at the end of free time, but they left determined to rock again.

Returning for his fourth year, Cal had plans to start another Rock Party. The date was set for the first Wednesday, with more plans for each Wednesday after that. Aided by Hannah Hale, he instructed people to bring their rocking chairs to the balcony, and they did just that. This second rock party was much larger than the first, and also had much louder music. The obvious, punny songs had been played, rocking in unison had been achieved, so the song Trouble by Taylor Swift was played. Everyone with a chair sang, or should I say yelled, the song at the top of their lungs, which drew the attention of the administrative staff. Sarah, the RLC, stormed onto the balcony and yelled at everyone involved for not only being excessively loud, but also removing furniture from the dorm rooms, which was strictly against the rules (Not really, there were no rules about removing chairs from your room, you just were not allowed to damage the host property in any way). The party dissolved in under a minute after that, with all chairs returning to their rightful home.

There were no other Rock Parties during the term, and there likely never will again. Not only because it will most likely get everyone involved yelled at, since the chairs aren't supposed to be moved out of the dorm rooms, but also because, with Cal having ended his fourth year, there is nobody left to start one.