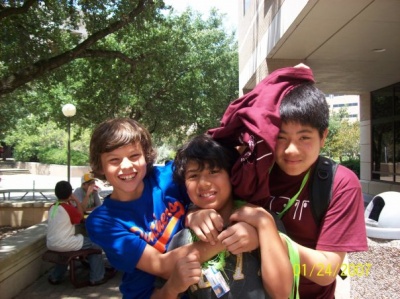 He attended TiP for four years at Texas A&M and UGA.

The students in Programming Robotics Term 1 2015 believed that Sam didn't smile enough. However, it was hypothesized that Sam smiled at least once every day, during his daily punishment for the annoying kids in his class(A.K.A. The Peanut Gallery). One of his favorite pass-times during class was making the naughty boys in his class write essays. In fact, his reputation as a ruthless yet entertaining T.A. spread throughout camp and many flocked to him in search of this spectacular person. Sam bawled his eyes out at the last dance knowing that the kids he tortured so much had to leave and he couldn't do anything else to help them "build character." Towards the end, everybody realized that they loved Sam, no matter how much he made them suffer.

Sam as a Fashionista

Sam was often found wearing his signature Superman SnapBack, and if you're lucky, you'll catch him wearing his Superman T-Shirt as well. Pretty sure the Superman T was his only non-jersey shirt. He cycled through various jerseys the rest of the term to let everyone that he played ultimate. Maybe? As an instructor in 2018 every Friday he wore a Hawaiian shirt

One of his favorite past times during TiP is to attend the evening activities that required some athleticism (TiPsters often lack this skill) and watched TiPsters cry as he demonstrated his evident athletic superiority. During kickball, Sam was not afraid to laugh when some annoying kid was nailed in the head with the kickball. During wiffleball, Sam merely watched and surpressed his laughter while the legendary E-Money$$$ was chased in circles around second base for what seemed like 5 minutes