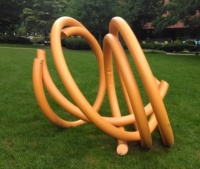 Squirtism (also known as The Cult of the Steam Whistle, The Cult of Squirt, etc) is a "religion" created by the 2018 Spacecraft Mission Design class at Georgia Tech. It centers around Squirt, which is the weird abstract piece near Tech Green (no, we did not make up the name - that is the actual name of the piece). Squirt is made of painted steel, and it can be either yellow or orange depending on who you ask. Despite what some may say, Squirt holds NO TIES TO PASTAFARIANISM and is solely Squirtist.

The Spacecraft Mission Design class first saw Squirt during break. We were all very confused as to what it was supposed to be, and it was kinda funny since it was kinda dumb. When we found the plaque that said its name was Squirt, we were sold. The class climbed on Squirt for the first few days of the term until we got yelled at (even though Squirt is literally made of steel), then we just hung around it.

Squirtists like Squirt a lot and we usually stay in the area where it is during break. Plus it's really shady so it's nice. Squirtists acknowledge the Steam Whistle, which is a loud, blaring noise heard several times per day on weekdays. When heard, you should raise your arms and face wherever the Tech Power Plant is (since that's where the steam comes from). Don't hesitate to do this if you're in the presence of other classes, it helps to attract converts. You also shouldn't eat pasta on weekends since the steam whistle doesn't go off then and Squirt looks like pasta. This isn't as hard as it sounds though because the pasta at Tech is gross. The official drink of Squirtism is Mountain Lightning (not to be confused with Mountain Dew), the official pose is the T-pose, and the holy text is Thomas's comp book.

When the TiP Blog made a class spotlight for Spacecraft Mission Design, they misinterpreted the steam whistle praise really badly. It was also basically the only thing they wrote about us so it was kinda upsetting. Other TAs of other classes also actively discouraged their kids from praising the steam whistle.