Stephen... just the greatest RC ever. Duke West 2012 was his first time as an RC... And in the Haroon 5's opinion, he nailed it. Stephen was known for his great love of the movie "The Princess Bride", as well as his Spider-Man pajama pants.

Inspired by Victor and Michael's dramatic readings, Stephen went on to drop out of college and become a professional dramatic reader himself. See here. 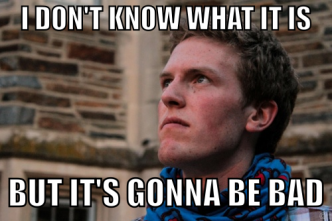 Stephen the RC, known for not knowing.
Retrieved from "http://www.tipwiki.net/index.php?title=Stephen&oldid=52573"