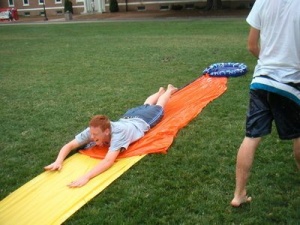 A TiPster enjoying the Slip and Slide

Slip and Slide Sunday is a tradition where a slip and slide is brought out on the second sunday of TIP after church, and people slide on it. Often, two slip and slides are connected to increase their lenghth.

This tradition was upheld at East I '05, and attempts were made in '06, but, due to rain and lightning and the staff being unwilling to hand over a Slip n' Slide to TIPsters without supervision, the plans were never carried through, much to the chagrin of Peggy Nelling.

Several TIPsters who had switched from Term I to Term II at East 06 brought out a slip and slide on the last Friday of the term.