At East Term I, 2008, a RAG that was arguably the coolest, most random group of girls ever was formed under the wise leadership of Cadene Russell. 16 girls and their RC leader bonded and became known throughout Alspaugh (and Bassett and Pegram) as the Muffins. During East Term I 2009, new girls came to TiP and became muffins.

The Creation of the Muffins

One day, an RC and her girls were on their way to a Durham Bulls baseball game. Unfortunately, because of the torrential rainstorm, they were held in an auditorium for what felt like days, but was only an hour. In that time, some of the girls decided they needed nicknames. Earlier that week Eleanor talked to one of the other girls friends on the phone saying "Hey Bitchmuffin. Slutmuffin. Anything with muffin!" The RAG decided that because of that incident and because muffins were just that cool, all of their nicknames would have muffin in them. By the end of the day, the entire RAG had their name. They were as follows.

Note: the idea of "muffins" originaly came about when Ho Muffin told her RAG the true meaning of "baking." Soon, Slut Muffin became well known for her Easy Bake Oven and Butter Muffin became referred to as a "Betty Crocker", and the idea of muffins soon followed.

Being true muffins, the girls insisted that their muffin names be put on their termbook page. Unfortunately, due to censorship issues, the girls were forced to get creative, and therefore some Muffin Names were altered slightly- 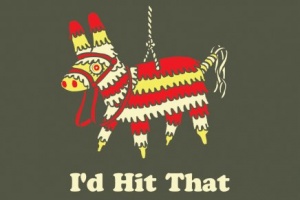 The true joint mascot of the Muffins and the 2008 Screenwriting Class, Tippy's legend is such: One dark and stormy night, Cadene (Master Muffin) informed Jordan, a naive, freshly baked butter muffin, that a package had arrived for her. After hours of speculation about the large- but light- package, it was finally opened. To the joy of the girls, it was a large and colorful donkey pinata. That night, Butter took it to Evening Session where it was revered and many "bang that ass" jokes were made. Later, careful surgery was made upon the newly-christened Tippy and his candy innards were removed, only to be replaced with packing peanuts. For the rest of the term, he spent each night in a different muffin room and was dressed each day for Screenwriting class. He was successfully taken home with Butter to Dallas, and will return in 2009 as a third year.

ALTERNATE STORY: Once there was a pinata named Tipburg Theodore Williamston III. Growing tired of his old-money family, he ran away and joined the IDF (Israeli Defense Force) and after getting shot, came to TiP, where he was revered as a mascot and given the honorary muffin name "Bang Muffin."

Once the original muffins become fourth years, they will pass on Tippy to a deserving, spirited third year at the end of the talent show.(LIES! Tippy was NOT passed on, or if he was, I have no knowledge of it.)

Tippy was stolen Term 1 2009 by Peter and Will, and then stolen by SPANC. During the final term Talent Show, he was given back to the Muffins at the end of Doctor Doctor, to the surprise of everyone in the audience.

Tippy attends as many TiPunions as possible. To date, he has been to Dallas, Austin, New Orleans, and Alabama.

The Muffins discovered early on in the Term that most of them shared a love of Musicals. It makes sense that there would be a lot of girls who loved musicals at Nerd Camp, but they were excited anyway. For the talent show, several Muffins (and a cupcake) performed Seasons of Love from RENT.

The next year, while chilling on the quad sometime near the last week, a handful of Muffins decided they wanted to repeat, nay, outshine the previous year's performance with something new. Someone (Edit: It was definitely Jordan.)asked Eliot Beckham, who was sitting with them with his guitar in hand, serenading them all, if he could play the song "Good Riddance (Time of Your Life)" by Green Day (otherwise known as "That Song They Always Play at Slideshows, Graduations and Reunions"). He did so, and the Muffins began singing along. They then proceeded to improvise a harmony, sing the violin solo, and impress the hell out of everyone else on the quad. They were placed as the last act at the talent show (barring the staple fourth-year act, Doctor Doctor), and during the amazing performance, it is said that several members of the audience began crying (IN NEED OF CONFIRMATION). They plan to repeat it with an even better act as fourth years. (Edit: that's not just a plan. It is a fact. We RPS-confirmed it.) And now it's a tradition. Good job Muffins and Eliot.

For a brief period, Evan "Wet Biscuit" Stone- so named for his extreme sweating habits- became the "Muffin Man." Unfortunately, the girls soon tired of his stalkerism and reverted him to Wet Biscuit. He is known as such to this day.

The next year, it was semi-unanimously voted that Chase the TA, aka the hottest male TA on campus that summer and ANY summer, is the true muffin man. We pretty much agree that we'd take his banana-nut muffin anytime, anyplace, anywhere.

But seriously Chase call us?

The majority of the original Muffin RAG returned to TiP as third years, bringing with them Tippy and other various muffin traditions. The group grew to include several new muffins, including Casey Chorens, Rupsha Basu, Cappy Pitts, and Ashleigh Caison. All of these girls became famous for their extraordinary TiP spirit. At one point in the term, it was stated by an envious fourth-year that "the Muffins just have that Muffin attitude. If a TiPster is a muffin, you can pretty much tell by looking at her."

As third-years, the Muffins were kick-ass(-afrass), and will obviously be the best fourth-years to walk the halls of Duke University.

It should also be mentioned that the Term 1 2009 slideshow was almost completely filled with pictures of third-year muffins and their male counterparts, the biscuits. It was not intentional.