The famous Smoothie Bar at the Village Summit dining hall

The Summit Challenge is an event held at the Village Summit dining hall at the University of Georgia on the last day a TiPster is able to eat there, which can either be a Wednesday or a Friday. The Summit Challenge began during Term 1 of 2013 by Justin W. Flory, a Fourth Year at the time.

The challenge consists of a TiPster drinking one of every smoothie available at the Smoothie Bar during the lunch hour. While this sounds simple, it is actually harder than it sounds because the smoothies aren't the lightest things when consumed all at once. There are six smoothies available at the Smoothie Bar on any given day at the Village Summit dining hall. There are five smoothies that are consistent on a daily basis, and one that differs from day-to-day.

The last confirmed smoothie lineup from 2013 to 2015 is as follows:

The new smoothie bar lineup for 2016 is as follows:

The smoothie bar for this year was changed to have 1 alternating smoothie and 2 permanent smoothies. The challenge therefore is to drink 6 smoothies, at least one of each, and then 3 of the challenger's choice.

The decree of the first occurrence of the Summit Challenge was written by Jackson Carroll from the Team Programming for Video Games class in the first term. The decree is as follows:

This list is ordered by who finished the challenge first. 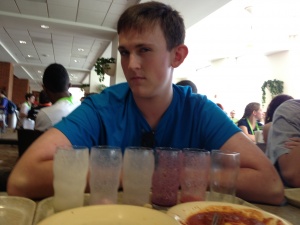 One of the few participants during this term was Duncan McManus, who successfully completed the challenge. This was in direct defiance of Sean, the OSD, who told him not to get his sixth smoothie. Being the TiPster that he is, however, he got it and chugged it down, his success marked by thunderous applause from the surrounding tables. This, of course, drew the attention of Sean, who punished him with early bedtime and made him spend his free time writing an essay.
Many believe this achievement to be well worth the price, however.

There was one more TiPster who completed the challenge this term, Richard Jung - a second year. He completed it at his last lunch at Summit the day before the final day. No one caught him.

On the first week of class, Pharmacology fourth years Andrew Thomas and Virginia Fountain attempted the Summit Challenge. They both got through the first four smoothies, including the (Term 1 elected worst smoothie), Banana Split. After the 4th, Virginia went down to the restroom and didn't return. In the last minute of lunch, Andrew chugged his final smoothie when TA Piyush told him that he would get early bedtime if he didn't. The aftereffect of finishing all 6 stayed with Andrew for the rest of the day.

The Pharmacology class ate at Summit during the second term of 2015. On Thursday, July 23rd, two brave members of the Pharmacology class attempted the Summit Challenge... and succeeded. These individuals were Robert Hellinga, a 3rd year, and Thomas Williford, a 4th year. After completing the challenge successfully, neither of the two heroes showed any signs of feeling ill. They will go down in history.

This term, many TiPsters attempted the Challenge, but unfortunately, Tommy and Allee weren't supportive of the Challenge as a whole. Because of this, quarantine was introduced. If a TiPster threw up from the challenge, they were placed in "quarantine" for 24 hours and had to stay in their rooms. But kids did it anyway.

Victors: Zach Lambert (On the same day he completed the Bolton challenge and called it the "Danny Challenge")

During this term, many TiPsters attempted or completed the Summit Challenge. While the Challenge was technically banned, the ban was not strictly enforced as long as the participating TiPster was discreet about it. This term's victors were the following TiPsters:

The first two contenders to complete the Challenge were Robert Hellinga and Trey Avent/ The Milkman. Both fought bravely through on their second to last lunch at Summit and eventually came out victorious. Shortly afterwords, Chris Gregoire completed the challenge as well, as it was his last day to eat at Summit. Chris completed it halfway through his lunch, and even though the sick feeling overwhelmed him, he kept the contents in his stomach and emerged victorious. Trey and Chris later agreed that it was much harder than the Vermonster.

Jack Martha also attempted the Challenge, but due to the fact that he had eaten other food before hand, he was unable to get past the fourth smoothie. The next day, however, Martha took on the Challenge again, and emerged victorious. On that same day, a young legend by the name of Tey Um took on the Challenge. Due to Tey's status as a first year fourth year, he was not well acquainted with the rules of the Challenge. He was convinced by his class to drink seven smoothies. Being the avid TiPster he had already grown to be, he completed it wholeheartedly, which he later regretted very, very much.

On his last day, another TiPster named Josh Brandon attempted the Challenge. After getting through four of the smoothies and being wholeheartedly ready to continue, a fourth year who had no idea of the importance of this challenge threatened to snitch on him. Because Josh did not want his final night to be cut short, he regretfully did not finish the challenge.

Though the smoothie bar had greatly been reduced during this term, certain TiPsters still managed to complete it. This term's victors were the following TiPsters:

The challenge was the same as the previous year, and only a few TiPsters successfully completed it. This term's victors were the following TiPsters:

The challenge this year was slightly different compared to last year. Due to less varieties of smoothies and constant admin watch, all you had to do was drink 6 smoothies. This term's following TiPsters: