Young Writers is another Duke-sponsored summer program that takes place on East. The Young Writers "hate" TiPsters (meaning that the minority know there's a rivalry and the majority have no clue) edit: actually it's a big thing that's become more popular. The TiPsters try everything they can to exterminate them/make them feel awkward, as follows. 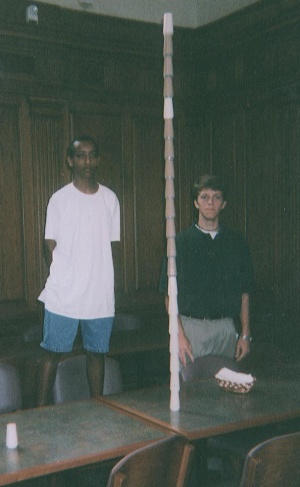 The majority of the Young Writers know nothing of the "rivalry" between TIP and their program. When a Young Writer is asked what camp they attend, they invariably reply back proudly: "DYWC".

Sam and Daag of the Trinity told a story in which they created the rivalry between TIPsters and Young Writers. In their account, the rivalry was started thus: the pair were trying to stack saltshakers in the Union dining hall in 1998 term 1. They made a stack of 20, and left in triumph. While leaving, they heard the following sounds (reenacted exactly by Sam at TIP Lore 2004, Term II):

And so, the rivalry was born. They knocked down our tower, but they couldn't knock down our pride.

It is common etiquette, when a swarm of Young Writers walk by, to shout with fist raised, "NEVER FORGET!" This phrase is associated with the salt shaker incident, often made into tattoos on Thug Thursday.

In East Term 2 2010, two fourth-years named Robert Blackwell and Tyler Varnadore decided that their mandatory fun was not actually fun. They snuck out of their activity and came upon a procession of Young Writers. Tyler, who later was expelled from TiP for socializing after-hours, decided that they should follow them in order to "find their lair". After hiding their conspicuous lanyards, they joined the ranks and proceeded into the unknown.

It turned out to be the Young Writer's last night, so they all went into an auditorium to watch slide shows and such. Robert and Tyler remained undetected and slipped into the back row. After it was over and everyone started to leave, a Young Writer supervisor lady (we'll call her an RC) held up a lanyard that someone lost. Tyler said to Robert "dude you should get that", so Robert took the lanyard, assuming the identity of an innocent Young Writer by the name of Joseph Duffield.

They followed the Young Writers to their air-conditioned dorms and set out to find Joseph Duffield. Many Young Writers sat in lame guitar circles and sang songs about writing, and others hugged and cried. Eventually, Robert and Tyler heard someone asking if anyone could come with him to the auditorium to get his lanyard. Robert kindly volunteered, but Joseph Duffield became suspicious because he had never seen them before. Robert and Tyler convinced Joseph that they were good friends and they should bond on the last night. So they decided to take pictures "for the memories man." There is a picture on Tyler's phone of Joseph Duffield standing with Robert. Who is still wearing his lanyard. Soon, Joseph and his writer friends realized that Robert was not who he said he was. Robert gave Joseph Duffield his lanyard and he and Tyler began to make their escape. The Young Writers followed them, and ensuing shouts of "Tipsters!" followed. They tattled to an "RC" who started to chase after Robert and Tyler, who shouted "We're smarter than you!" and ran off. The End