Birth of a Legend

This transient Punk-Metal-Classical-Pop-Indie-Rap-House band was born like so many bands are, in a Pegram dorm. A group of talented third years decided "guys, lets make a band for the talent show." The name was chosen after much thoughtful and insightful deliberation. Armed with only a guitar, a trash can, a spoon, a kinda sticky can, and ridiculous costumes, they set off to start a revolution of truth and justice.

All About the Band

The band's first EP, which is said to have influences from reggae, country, rock, and Don McLean. The name was chosen when the musicians realized that we all are connected, each one of us is slightly Swahili.

The first hit to come from the EP was technically known as "The Army of Plastic Replica Marches Through the Fields of Infidelity and Injustice to the Mountains of Hope, Freedom, And Love to Find Their True Destiny", but the song takes on new meaning every time it is sung, thus it cannot be contained in a single name. The first live performance of this song was at the Duke East Term II Talent Show in 2014.

You know what to do!

Stand up for your freedom!

What does that mean?

You find it out!

This is your life!

The time is now!

Who is it for?

Look in the book,

And see what I mean.

What have we learned? 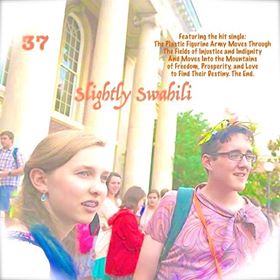