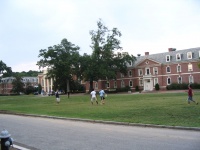 Giles Quad of East Campus, with TiPsters playing ultimate. The Union building can be seen in the back.

East is one of the sites for TIP Center for Summer Studies. It is the most traditional and fun campus, and its courses are often more artistic ones. Most classes are the SAME each year, we want something new! East is undoubtedly the best campus as it is superior to that of other campuses! Don't listen to West propaganda!

East Term I is the ideal Tip lifestyle. No to Term II, administration is worse!

East is, by far, the best campus for TiP. Its proximity to Ninth Street and its several large quads (see below) make it fun at breaks and for activities. It certainly forms a bond among the TiPsters, in addition to making it extra-imperative that we get to know each other quickly.

Move a tradition to this section if you know it's common to both terms
Likewise, if you see a tradition that's not in your term, move it to the other.

If you are new to East campus, or TiP in general, see "An Unofficial Guide to Summer Studies: East Term 1" for a complete guide to attending East: https://docs.google.com/document/d/1AlbvwKCiu6-WizbKCu-7FmkH70_RRNq0EUr38BCx2ys/edit?usp=sharing

This pamphlet should explain East traditions, what to pack, general TiP lingo, and advice from East alums!