From the archives of TiPWiki, the unofficial Duke TIP Wiki
Jump to: navigation, search
Moose the Mouse is a relic [[1]] passed down annually to a fourth year at Duke East[[2]]. It resembles a crudely made piñata. 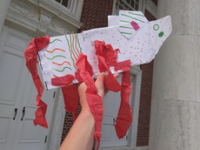 Moose the Mouse was created by Hannah Brecher, Maxton Huff, and Gavin Zahn in 2017 in an activity where they were each given a tiny amount of supplies to individually make piñatas. Instead of boring themselves by making a dull average piñata by themselves that they'd throw away in a matter of days, Hannah, Gavin, and Maxton decided to work together and use their combined resources to make a better, more unique piñata that they ended up liking so much that decided to preserve it in the form of a relic that would live on as a relic and a memory that would never die. So, Moose was carried by Hannah Brecher in 2017, passed down in secret to Maxton Huff to carry through 2018, and passed down in secret to Aidan Williamson to present in 2019, who started its tradition by having it presented by blazemaster [[3]] Garrick Reeder [[4]] at TIPLore and revealing himself as the owner at Quadfest [[5]] 2019, where he pulled out the relic, and, relic in hand, gave the first Moose the Mouse Speech. Moose the Mouse has since been passed on to someone who will remain anonymous until QuadFest 2020.

Moose the Mouse is passed down in secret each year to a calm person with a spontaneous sense of humor. The owner of the relic must not let anyone know they are in possession of it, they must have it presented by the current blaze master at TIPLore, and they must reveal themselves at QuadFest, where they must emerge from the crowd, go to the mic, pull out the relic, and, relic in hand, give a brief speech where they mention the details of the relic and outline its significance in any way they wish. Each year, when a new holder is given the relic in secret, they draw a line and sign their name, with the purpose of collectively creating a design on the side of the relic the crowd can see when the holder gives their speech at QuadFest.

The current name design minus the name of the current holder.

Moose the Mouse is the first known relic with its tradition inherently tied to QuadFest, it represents the life you live at TIP, and its purpose is to remind TIPsters of the finality of every part of that life, letting them know that even if QuadFest may not be astounding one year, it's something they won't be able to experience in the future, so they should enjoy it to the fullest while it lasts so that they can look back on it as a good memory, rather than feel sad that they missed something after it's over. The anonymity of the holder serves as a symbol of the indiscriminate nature of the TIP spirit, in that, much like the relic itself, at any given time, anyone could have it.

Holders of the Mouse