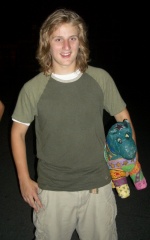 AC/DC, the 2007 Llama Mama, and the Llama. The Llama is a classic example of a TIP Relic.

A TIP Relic is a special object treated with an air of veneration as a representation of TIPster spirit. TIP relics are usually held by a fourth year and at some point on the last night passed down to a 3rd, or sometimes 2nd year. The recipient in turn will return to the same campus and term the next year, to manifest the Relic, and then on pass it on in turn. Relic holders should at least be “iconic,” or somewhat known by the Tipster community, and have distinct traits, personalities and qualities that distinguish them from the general Tipster populace.

TIP relics are most common at East Campus, possibly because it has always been the traditional and first campus and therefore the attending tipsters are more communal.

At East Term I, relics are created as results of a tradition that is passed down for a minimum of two years, at which point it becomes an official relic. Traditions that are eligible for relic status are approved at the fourth year relic meeting by a vote. Not all relics make the cut!

Some relics have roles, and lead important events during the term, but those are only a select handful.

The relic holder is supposed to have some sort of connection to, knowledge of, or deep relationship with their predecessor, but during a lot of special cases, relic holders obtain relics based on predecessors’ pure observations.

(Ordered by year of creation, the relics are as follows)-

Note: UGA has a lot more relics than just this one.

Relics are passed down via wills, not talent shows. (to be continued)

Note: At West, relics aren’t usually passed down at the Talent Show, unlike at East.