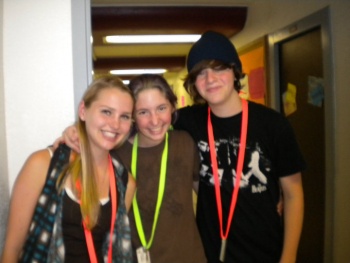 A TIPster is any teen who has gone/goes to TIP Summer Studies program or Field Studies, and believes fully in the traditions and abnormalities of TIP. They are normally accesorized with a neon colored shoelace.

To be admitted to TiP, you first have to take the SAT or ACT in 7th grade. Your scores qualify you for classes. So, essentially, you have to be really smart. In fact, when we get there, they congratulate us, saying "You're in the top quarter of the top one percent!" Nobody's ever said what we're the top of, but we assume it has to do with smartness. Though many TiPsters lack common sense, intelligence is the most basic quality of a TiPster. Summer Studies TiP lasts 4 years during which your TiP Age is either a 1st, 2nd, 3rd, or 4th Year.

Any TiPster, after about one week of one term at TiP, aquires this distinct personality trait which, for lack of a more specific word, we'll call "awesomeness". TIP is love (llove at Duke East Term II), and there's no better way to put that. Living at TiP changes you from a nerd into a TiPster. You're not just smart anymore; you're awesome. You're part of (arguably) the most amazing nation family ever. Not only that, but you are part of the magic of TIP for everyone around you. That's an honour not bestowed on just anybody.

Being a TIPster has many nuances and is associated with an emotional roller-coaster of going to TIP, leaving TIP, and waiting for your next term at TIP. It's impossible not to fall in love with TIP. Almost all TIPsters report a fundamental change to their personality on leaving TIP.

There are six rules to being a TIPster which sum up TIP in the most negative language possible. All TIPsters should know them by heart, but knowing them in order is not necessary.

Sam Prevatt and Daag Alemayehu denied ever being TIPsters; they claimed to have been instead "TIP students." It is unclear as to the origin of their aversion to the term "TIPster."

How to Recognize a TIPster

Walk up to your suspect and say "Snarfle". If the person looks at you as if you've just been released from a mental hospital, you know he/she is not a TIPster. If the person glares at you and begins questioning you about how you found that word, you've struck TIPster gold.

Alternatively, one can set up a large stereo system in a crowded public area to draw any nearby TIPsters out. Playing any one of the seven Official TIP Songs will automatically cause all TIPsters in the immediate vicinity to lose all control of their muscle functions and ravenously dance and/or begin to sob uncontrollably. (Note that American Pie will cause swaying instead of dancing)

Hilarious methods aside, the best way to recognize TiPsters in a group conversation is simply to begin an anecdote with "One time, at nerd camp..." If they reply with another TiP story, you've found a TiPster!

TIPsters can have IQs to rival Einstein's, but simultaneously be the dumbest people you'll ever meet, so watch out for whoever has the best grades and the least common sense.