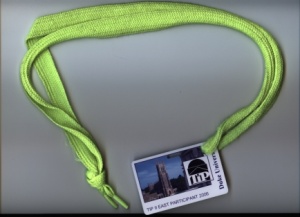 A shoelace from Duke East. The color indicates the wearer as a 2nd year or 3rd year.

The shoelace (commonly called a lanyard) is the most important fashion statement that can be made by a TIPster. It's how anyone on staff (or anyone who knows about TIP) can identify a TIPster without much trouble. The shoelace is used to separate TIPsters from participants in other programs, and also to hold your ID and key conviently on your person at all times. At Davidson, the staff may warn you about a tree that has supposedly been the final resting place of many twirled shoelaces. LISTEN TO THEM.

Most campuses have three colors of shoelaces, debateably. It's often a neon yellow/green for 1st-3rd years, usually orange for 4th years with 4th-year privileges, while staff usually carry a yellow/green and orange lanyard.Staff themselves wear a neon blue lanyard. Davidson, Wake Forest, and Trinity just has the one color, since they don't have 4th years. (See TiP Age)

Recently, there was a debate over whether or not there was actually a difference between second year and third year lanyards. However, the debate has been resolved, due to this evidence:

Many people attach great emotional value to the shoelace and wear it outside of TiP. Wearing the lanyard shows TIP spirit and a longing to be reunited with TIP, as well as reminding the wearer of how they have been changed by TIP. This is an individual choice, however, and hardly ever mentioned at TiP.

The only times I've ever taken off my shoelaces is when I'm showering or sleeping.

"Shoelaces may fade but they never go away." "Where there is a lanyard there is a home."