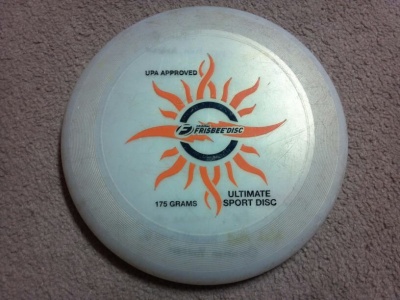 The Watercolors Disc in all of its glory

The Watercolors Frisbee symbolizes being the captain of one of the Ultimate Team at East Term 1: Watercolors. The disc is a 2003 Wham-o that has seen its fair share of play during its time. On the inside of the disc is a message that has become faded. The disc reads: "Do as much work with next year's Watercolors as you please. I love you bud."

The disc is passed on during the talent show with the other relics of East Term 1. It is passed on from the current Watercolors captain to the best 3rd year1 ultimate player. The 3rd year who receives the disc will, if they return, be the captain for the next year's Watercolors team.

1The Watercolors Disc was passed to a 2nd year in 2019 due to complications
Retrieved from "http://www.tipwiki.net/index.php?title=The_Watercolors_Frisbee&oldid=76385"