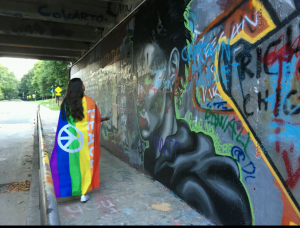 The Pride Flag itself.

The Pride Flag is a recently officiated at Duke East Term 1 that is currently held by Lillian Sylvia going into 2020. It was worn outside for the entirety of Term 1 of 2017 by the relic founder and was worn for the entirety of term by the second holder Will Snider in 2018. It became official in 2019, when Braden Borbely became its third holder.

The duties of The Pride Flag include wearing the flag as a cape in every possible situation including with, under, or over another relic. The holder of The Pride Flag should be a memeber of the LGBT+ community who is comfortable enough in their identity to wear the flag and have discussions about the LGBT+ Community with allies, young LGBT+ Tipsters, and anyone that might have questions about or is offended by the Pride Flag. They should be comfortable helping anyone and everyone through any feelings, questioning, and other problems they may have.

The Pride Flag is approximately 4x2 meters in size, and it weighs a few grams. It is a typical rainbow-colored pride flag with red, orange, yellow, green, blue, and purple stripes. The Pride Flag has a large peace sign with the word "peace" written in white in capital letters in a sans-serif font, above the peace sign itself. The names of the holders are written in the green strip, which is prominently shown when the holder wears it.