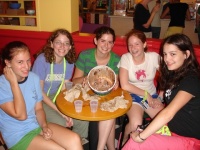 Five girls have finished a Vermonster.

A Vermonster is a very large tub of ice cream from Ben & Jerry's. It consists of twenty scoops of ice cream in up to five different flavours. It is topped by brownies, chocolate chip cookies, bananas, chocolate and caramel sauce, chocolate chips, sprinkles, masses of whipped cream, and one cherry. It comes in a gallon-sized plastic tub printed with cows. Vermonsters are sometimes prizes.

Also, during East Term II 2007, Rachel Watson began to carry around a baby named Vermonster (he was 8 months and 3 weeks premature) who may or may not have become a TiP relic, as he has a large family and was passed down to a third year, Taush. Also, Vermonster is the first official .

During East Term II 2008, he was passed down to Fat Tony, a third year then.

and some people, like myself, believe that Vermonster will take over the Llama. (It won't)

The Vermonster Challenge is among the highest orders of challenges that one RAG might issue another without instigating a "RAG war" and was first issued during Duke TiP Term One 2009 by John's RAG against any and all challengers- all others failed to step up to the plate as all campus knew of Joe Sharp, Brian Strubbe, Ward Frances, Alex Goldberger, and Matt Benenati's previous consumption of one such item, and were unwilling to combat these five with additional foes opposing them, as the threat was far too great.

On Friday, July 17th, 2009, the first ever Male-Female Vermonster Competition was held. On the boys team were returning Vermonster Champions Danny Richey, Mehul Mehta, and Patrick Russell. The girls team consisted of Elise Wolf, Amy Tingle, Dana Oglesby, and Madeleine Boudreaux, not to mention their enthusiastic coach Emily Slavin. The boys team allowed the girls team a fourth member upon request, though some might say it provided the girls with an unfair advantage. Thousands came to spectate. The girls started off quickly and were done with about half of the 'monster before hitting the proverbial "wall". The boys, veterans of the highest caliber, plodded along slowly, yet steadily, toughening the trash talking coming from their worthy adversaries while artfully destructing their beast in a bucket. Imagine the look of utter terror on the girls faces as their most worthy counterparts charged back and nearly finished their Vermonster in a faster time! The competition, ultimately, was deemed a draw, with the girls finishing in just under 25 minutes and the boys finishing in a bit over 27. These results have been disputed (mostly by the girls team, whom some would refer to as "poor sports"), saying that the girls team did, in fact, finish faster, and thus should receive bragging rights and the title of "victor". However, rules shook on by ALL members of both teams before the event stipulated that completion, NOT time, would determine the victor. So it was a tie. Though it is almost physically impossible for 3 mouths to eat a load of ice cream more quickly than 4, the boys, champions of the highest regard, put up a valiant effort and proved to be worthy carriers of the banner of manhood. The girls deserve major props as well, especially Elise "The Machine" Wolf (who, it is estimated, ate about 9/10 of the girls' ice cream. Needless to say, the boys submitted a formal appeal for Ms. Wolf to undergo genetic testing, similar to that one South African runner who was discovered to be a hermaphrodite. She came up clean, though she did test positive for three types of anabolic steroids and a low-grade beaver tranquilizer.). The four girls would like to thank their coach, Emily Slavin, for her "generous" suggestions. Refereed by the RC Amaresh, the event was a fantastic success and will hopefully continue in the future.

It should also be noted that at Duke East Term 1 2010, the members of AFT were proud to have vanquished the Vermonster in under five minutes. This was put to shame at Duke East I 2011, when Gabe's RAG believed themselves superior after setting a new record of two minutes twenty-five seconds. Their victory was short-lived, however, when Josh's RAG devastated the poor bucket of ice cream in a jaw-dropping one minute fifty-one seconds. Long live the Bromance.