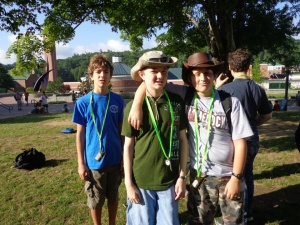 Clay is a TiPster who attended TiP for four years from 2012 to 2015. He was born and raised in the great city of Atlanta, GA, and now resides in the greater city of New York, NY. He attended ASU, Duke East, and Duke West.

Clay was one of the founders of the religious movement known as Frankism. It is said that on the first day of Term II, 2014, he suggested, "Hey, let's start a religion around Frank!" Frank, the RC, said in reply, "No no no no no no," and then left his RAG to go do the skit that is intended to teach TiPsters the rules and do's and don't's of TiP. It was discovered here that Frank is an excellent rapper and that he should be worshipped for his Kanye-like characteristics.

This story is a myth, of course, and should not be believed verbatim. Clay does not get credit for being a founder of Frankism because Aurian was the one who got the most followers converted to Frankism. The original idea for the religion came from Clay. Lol.