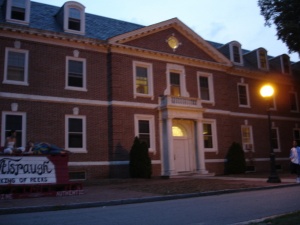 The first day of arrival for all TiPsters housed in Alspaugh is usually spent:

Located in between Lilly Library and Pegram, it is sometimes a mix of second and third years, and it has a cool name. Because the writing above the door is in traditional roman form, it appears to newcomers as ALSPAVGH. Many new and returning "intellectually-gifted" TIPsters have made the mistake of thinking it is a V instead of a U.

Inside there is greenish carpeting with the bottom half of the walls painted green, although surprisingly, during quad fest the color is red. Don't let the second years consume you. ;-)

This dorm is also affectionately known simply as "Spa." At one point it had a bench covered in flames proclaiming Spa as "The Hot Spot," but unfortunately that was probably burned it Duke basketball revelry.

As of TIP 2009, the Alspaugh bench features the Dorm Name (Alspaugh) featured in large block letters, with the slogan "Full Of Substance," below it and a smoking cigarette within a circle to the left. The background is red.*

As of TIP 2015, the Alspaugh bench features the term "A-Plow" in calligraphic white letters. It also displays several flowers in the same white paint. The background is pink.

As of TiP 2017, the Alspaugh bench features a lovely lavender bottom with "Alspaugh" written in a very well-drawn "olde english" font. The top half is white with the word "The Plow" in the same font but in lavender. However, the RCs thought that "The Plow" was too inappropriate (don't ask how any of the other bench shenanigans weren't) and painted it over with white paint, much to the dismay of TiPsters.

Durin Term I 2011, it housed Erika Morck's RAG (Best Rag ever). Alspaugh was also home to the most relationTIP's during this year. During Term II, 2003, its Common Room housed a ping-pong table. Now it houses a Foosball Table and a ping pong table. Week 3, Term II 2005, the Alspaugh common room was closed because some furniture was broken when some TIPsters reportedly got rowdy while performing belly dances & lap dances, and a destructively painful game of ass tag. The common room was only unlocked on the last night after the Talent Show.

A notable occurrence of Term I 2005 was when one of the vending machines started spitting out Frescas nonstop. This incident was repeated in Term I 2009.

Note from Sass: I led the Belly dancing & there was no lap dancing! that took place elsewhere. What got us kicked out was the fact that the place was a mess afterwards, but the AssTag probably didnt help much.

Note from Caro: I verify what Sass says is true. There was no lap dancing, although money exchanged hands.

Note from Emma: yea. there was a crap load of sitting on other people, obviously butt to lap, but no dancing in said lap. just a reeeeealy painful ass tag, a broken table(which was broken when will and his dad and brother preformed in the common room), some turned ovr tables, and yea. just general roudiness. wut can we say, we'r tipsters, we cant help it. its in our nature. and i'd also like to mention that i did make a couple bucks from the bellydancing, as mentioned by sassarooni and caro.

During 2006, Alspaugh housed 4th years (and a few third years in a 3rd/4th combined RAG)

During 2007, Alspaugh went back to the traditional 2nd/3rd year mix. The bench was painted red with "Absolut Alspaugh" written on it. The Cheers were both Fergie tuned Alspaughlicious and a version of London Bridge about Alspaugh. However the most important incident in Alspaugh during 2007 was the "We Got Knives" incident mentioned below.

During 2009, Alspaugh housed 2nd and 3rd years. The bench was red with the slogan "Full of Substance." The cheers were "Welcome into Alspaugh" and an Alspaugh twist on "Trogdor." Alspaugh lost the most members to Giles (quarantine) during Swine '09, but still managed to beat the Brownies and take 2nd place in Quadfest. Alspaugh also commonly practiced a new cheer: "Alspaughtans, what is your profession?" "Ahoo! Ahoo! Ahoo! (fist pumps)" during this year.

During 2010 (Term 2), Alspaugh held only 2nd years, given that there were a crapload of us.

2011 (Term 1), Alspaugh's wonderful winning entrance to Quadfest included reenacting a scene from The Lion King by holding John-Francis up in the air and everyone bowing to him.

In 2013 (Term 1), 4th year TiPsters arrived to discover, horrifically, that they were in Alspaugh, while the second years got their precious Bassett. It is unknown as of now whether this will carry over into Term 2 or not.

In 2015 (Term 2), Alspaugh held all boys, due to the fact that Brown was under construction and 3rd floor Bassett had TAs.

Alspaugh "We got knives" incident 2007 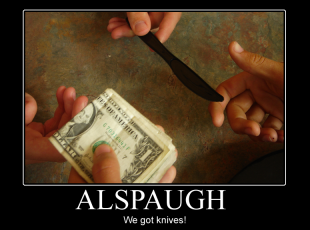 The "We got knives" incident occurred about halfway through the second week of Term 1 2007. Some 2nd years had been buying knives from the store Native Threads on . It started as a kid getting in trouble for betting and one of the witnesses inadvertently mentioned the knives. A large series of incidents occurred, including gathering all the 2nd year boys in Alspaugh to go to a meeting at about 10:30 one night and eventually led to 3 people getting kicked out( only for the year) and a few others on "house arrest" in which they had to stay in their rooms while not in class, meals, or mandatory fun.

The knives incident by the next day was known all around the campus leading to many jokes. Firstly, the unofficial Alspaugh Quadfest cheer was simply "Alspaugh: WE GOT KNIVES!" Throughout the following week and a half, it was common to hear the occasional "Alspaugh: We Got Knives!" During the 4th year "Doctor, Doctor" one of the "as dead as"s was "as dead as those kids in Alspaugh with knives?" This lead to a standing ovation from the auditorium. Later that night, during the slideshow, any time a picture of one of the kicked outs got shown, the crowd cheered.

One rag, the Scones, headed by Billy, lost 2 campers to swine flu.

The "Fire" happened during the night of June 24th. A night before the incident, Tipsters of "Nick's Rag" and "" were having a meeting when smoke was smelled throughout the third floor of Alspaugh. The rooms were then searched for any sort of microwave or illegal object, but none was found. The night continued on as normal.

The next night, as "Nick's Rag" was having a meeting, smoke was smelled again. This time, the smoke detector gave off one beep. Nick told his rag to search their room and see if anything was burning, but none was found. The smoke detector then went off twice, and the entire building was evacuated. This led to chaos on the quad, as people in Brown would open their windows to talk to the evacuees. The source of the smoke was claimed to be a hair straightener, but since the third floor area where the smoke was smelled was on the boy's side, that claim is debatable.

While most people were rushed to put clothes on in the panic, two members of Armonie's Rag had other ideas. In a hurry, Billy ran from the building in nothing but boxers and Jake in nothing but sweats and a lanyard. The two then began a game of zip-zap-zop that quickly evolved into Boi-thicc-thot. The fourth year girls were upset with the double standard but oogled at the two nonetheless and compared...