Lilly Library is located on the West side of Duke East's Circle Quad. In the past, TIPsters have had book-borrowing privileges (see the Journal of Social Hygiene), but it is unclear whether they still do. As of Term I 2014, they could still check out books. TIPsters may, however, use the Lilly computers. The Lily computers were never officialy given a time when you could and could not use them, so if you felt like going to the computers when it wasn't 4-5 free time, you could go to Lily LIbrary (Although not officially announced, my roommate and I went in after breakfast around 8 and someone on TIP staff (I don't remember who) told us we weren't supposed to be in there). This, coupled with the Brown Computer Cluster, underneath Brown dormitory, makes up all of TIPsters' access to computers, so they are often crowded (although Lilly's lab is consistently less crowded than the cluster). Lilly Library is also home to the China Room, a comfy, sofa-adorned room on the second floor, suitable for reading or class presentations (for example, The Play's the Thing, a Shakespeare class, presented The Tempest and A Cross Cultural Study: Vampires, a vampire class, presented Dracula in the China Room in 2004, term II. They were going to in 2005, but an unfortunate accident involving a broken lightbulb ensured otherwise).

During dances, it is possible to hear the echo of the music coming from speakers on the Union off of Lilly. There is a delay of approximately one-half second, and it can be very dramatic.

Down in the depths of Lilly Library, there is a small cluster of computers that few know of (at least for the first few days of the term).

Nearby the Secret Computer Cluster, there is an amazing study room with moving bookshelves, similar to those in Perkins. During the Young Writers session, this study room is occupied. But during the 4-5 free time, the room is vacated. Pressing the buttons and moving the shelves repeatedly is a highly reccommended activity.

The Stacks of Lilly 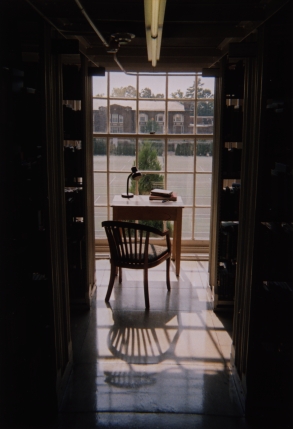 A desk in the stacks.

The stacks in Lilly are rumoured to be haunted, a situation which was investigated by the High Spirits class of East II 2006. The 4th level is particularly interesting to this chronicler. Also, if you mess around with the dumbwaiter, the library staff will kill you. We nearly got kicked out because someone else turned on the dumbwaiter and we sent it back down. You have been warned.