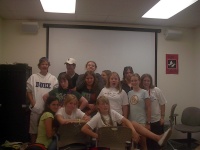 High Spirits was a class on horror and ghost stories which took place at Duke East Term II 2006. Not very ironically, but coincidentally, it was taught in West Duke room 204, where a professor reportedly killed himself and thusly now haunts the area. This is the first time this class had been taught, with the all wonderful Jen as the instructor, and Elizabeth the thrift store expert as TA. The class material ranged from Victorian corsets and post-mortem photos to ectoplasmic waste and voting welsh corgies.

Several students were reported to have suffered injuries within the last few days due to supernaturally bad puns, some of which were, "oh, the hora! the hora!" and a bad pun about a casket from one of the classmember's Spanish teachers back home. To hear the story, contact Caitlin Cummins on AIM at mme0max. There is also a very bad pun about twins from Spain and the Middle East.

Please add your name if you were in the class.

Feel free to add to or edit this list.