Sam Bagg was an RC at Duke East in 2006. He is going into his sophomore year at Yale, being one of the youngest RCs. He plays the piano, and accompanied TiPster in a classical Violin/Piano duet for the Term II talent show. Sam Bagg grew up in the Durham area, and attended TiP for 2 years. The extension 'Bagg' has been used for him since grade school, according to RC Sam Need, who has been friends with him since then. He may or may not return to RC again in 2007. But if he doesn't, many people will cry until they have exhausted all means of liquid transferrable into the tear duct area. Really

At East I 2006, his RAG would, after besting others in competitive activities such as Ultimate, yell "You've been Sam-bagged!" Sam Bagg (who is never called by his first name alone) starred in the Screenwriting Term I 2006 video as an anti-social teenage photographer. It sparked emotion in many a TIPster (myself included). The theme was mythology.

Sam Bagg's RAG of East II 2006 was themed with Lord of the Rings characters, with Bagg being, of course, Frodo Baggins. The East II 2006 RAG called themselves the 'Bagg Ragg', and signed the fingerpaint mural and other things this way.

On the second wednesday of term II, the rag supposedly carryied out attacks on various activities for RAG night. The attacks were conducted while wearing ninja masks created from t-shirts, and included water-ballooning Ultimate and running through the other dorms while shouting obnoxious Alspaugh chants. However, the RAG members themselves claimed that Mike's RAG was responsible. The so-called "Punked" RAG night was subsequently used by other RAGs, including the infamous SUPERRAG, which falsely claims to be the first to use the idea. The mystery of Osama Bin Bagg may never be solved.

Of course, Bagg Ragg was actually playing poker that night.

Early in the term, James was walking through the halls wearing only his boxers and an open bath robe. The OSC walked by, and dissaproved. At that night's hall meeting, Sam Bagg stated that shirts were not to come off until 10:15. Thus, it became a tradition in the rag to ask at 10:15 "What time is it?" and be answered with "Shirtless time!", whence all the RAG members, who were most likely waiting for Sam Bagg to show up to his own rag meeting, would take off their shirts. 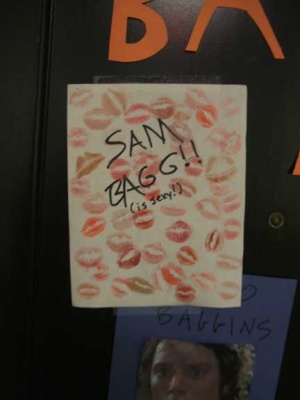 Lucas once taking several paper letters from the halls giant 'Welcome to Middle Earth' sign, and a C from another sign, spelled out an abbreviation of '(c)ontemporary (lit)erature' near Sam Bagg's door. the C was within the next two days removed, thought other words were spelled out afterwards. Also, a sign proclaiming "Sam Bagg!! (is sexy!)" appeared on Sam Bagg's door. Nobody knows who put it there, of course.