Bassett is the traditional fourth year dormitory for East Campus TIPsters, and also the coolest dorm. Bassett was occupied by the fourth years in 1990 when Giles was unavailable to house them. While a single group of 3rd years did make it into the dorm, the overwhelming power of the fourth year students turned Bassett into the greatest dorm TIP had ever seen and the legend continued from there.

Bassett is usually solely occupied by fourth years, while the other dorms often mix second and third years fairly freely. Occasionally, some third years will also be present in this dorm. During Term 1, 2017, Basset was a poorly balanced horde of female second and third years, with a lone male RAG holding out against the superheated, super dramatic, onslaught.

Bassett has rooms of rather inconsistent sizes, ranging from extremely huge to very small. Some rooms have mirrors, some do not; some rooms have more than one closet, some rooms barely have a closet big enough to be categorized as a closet at all. The first floor common room has many couches and tables, arguably better AC than the other common rooms, and is one of the most common places for tipsters to hang out during free time, excluding the hallways and the third floor common room. This common is connected to a small room with a piano in it, and many tipsters would go there to practice their musical talents. The rooms in Basset are eclectic, to say the very least, with a wide disarray of cramped and hot, to oversized and hot, to wildly misshapen temporary TiPster domiciles. One of many common threads between them all is their insane heat, due to poorly functioning A/C, and improper ventilation. Another connecter that helps keep Basset unified, is the pejorative lack of closet doors, which is present in the majority of rooms. In Term II 2017, the far right window in the commons had a sparrow nest resting in between the outward-swung mesh panel and the glass panel which TiPsters got to watch grow up. As heat rises, so too does the temperature in Basset, with temperatures on the third floor in centre rooms reaching the low 90's during the night, Tipsters beware, its awful hot in the doghouse.

In Quadfest, Bassett's current color is blue. Traditionally, Bassett was black because of a fourth year revolt around 1996 when the fourth years were separated. Bassett had used black as its' color all the way back to 1990. They like to throw quadfest and then be amazed when they win. Some second and third years note that Bassett has a suspiciously long winning streak in Quadfest, but fourth years counter that said streak is merely a proof of Bassett's superior talent, intellect, and Jello-snarfling skill.

Edit: On the (too many) occasions when Bassett (or any other dorm) threw Quadfest, it was always done with the intention of losing. There was no being "amazed when they win." No dorm has never won Quadfest when attempting to throw it. That is to say, when Quadfest teams attempt to intentionally lose, they always win.

Bassett's traditional Quadfest chants are: "Doggy doggy doggy, woof woof woof!" and "how do we do it? Doggy style!"

However, since Quadfest is no longer held by dorm, Bassett has no specific Quadfest color, nor a specific chant. Both Doggy Doggy and the color blue are reserved for fourth years.

In 2013, for the first time in all of recorded history, 2nd years lived in Bassett, while the 4th years had to live in Alspaugh (which is where they lived during their 2nd year). This was not taken very well by the 4th years. Bassett's Quadfest color that year was red, and they lost miserably. The 2nd years maintain that it is not due to lack of skill that they lost Quadfest, but to an unfair bias against them for being younger. 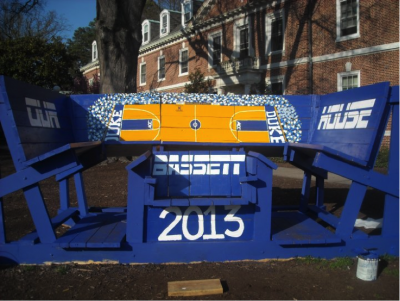