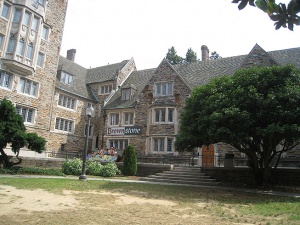 Kilgo is a Duke West house, now mainly used for staff office and posts, including for Evening Activities. The Kilgo Quad, complete with benches, sand and magnolia tree, hosts activities and the weekly dances.

Note: These sections all need to be fleshed out.

Kilgo commons has a few couches and chairs, where staff hang out but can be reserved for RC Group Nights. On the first day, desks are set up to give assigned rooms and shoelaces. The wall near the window is sometimes used for the evening activity lists. Usually it is just called K commons and is not as popular as O commons. Before this was due to the lack of a television, however there is a TV as of 2013 yet K still remains less popular. Water fountains and a single bathroom are open for use. During the dance, anti-dances are hosted here, complete with card games, RISK and readers. TIPsters are only allowed there between the first half hour and the last half hour.

During Term I in 2009, a water-balloon fight was started after the following TIPsters: , Austin, Liam, Bode and other members of Nathan's rag discovered the water balloons in the staff fridge. Soon after, water balloons were thrown around inside the commons room. The fight lasted for about five minutes until some very angry RCs walked in. Turns out, the water balloons were meant for Quadfest the next day. The only punishment was an early bedtime, and those tipsters agreed it was worth it.

The same term hosted a Puzzle Solving(?) activity; TIPsters were to divide into groups of five and solve 100 piece puzzles. They served orange soda and coke, along with pretzels and Cheetoes. A team of Asians won, some speculate it was due to the fact that they were able to use the table. Another team was unfortunately given a puzzle that was approximately 60% foresty area, yet were around the third closest to finishing. Odd conversations ensued among them, balloons floated around (and popped...) and fire extinguishers were notated as ducks. A Zoolander DVD was found left on another nearby table from a previous RAG night.

There are two benches around Kilgo quad, although only one is inscribed with Kilgo. The other is painted with the Greek letters of Sigma Nu. These benches are not just made to be sat on, whenever Duke beats UNC in basketball at home, these benches are used to create bonfires in the quads. Then new benches are built.

In the meanwhile, people take that chance to sit on them. One can rest and hang around the benches at free time. Sleeping on the very top really is possible; just make sure there are others there to prevent falls. They may also be used as a waiting area for and after activities. During the dances, many people sit and rest on both, if not inside K Commons. This time may result in overcrowding and awkward seating.Yes, awkward...

The benches also typically tend to become the home bases of certain groups, such as the "Nookies" and "Da Blob," who spend their time on their bench. They can be used as a meeting place for breakfast, hanging out, and more. And more!! A special bond can develop between TIPsters who "own" a bench and their bench of choice. The Sigma Nu one is often used by these groups.

Located closely to the most-potentially sandy area is a lone lamppost. It does not seem to mind the dust. It is questionable whether it actually is used or not(?).

The Quad gets nefariously dusty due to a lack of the sprinklers that overpopulate the rest of Duke West Campus, although its usually fine until Sandstorm by Darude (and other dance songs) start playing and mosh pits commence. It is truly a sight to behold, watching fourth years and smaller TIPsters crowd together and jump enough to actually cause thick clouds of dust. People's throats may actually hurt a bit the next morning. During Term 1 in 2011, several Jer-Bears made reports of coughing up mud that night and well into the next morning. After a period of very intense rain, Kilgo will flood because it is basically a giant bowl. For some reason, the staff gets very angry if any TIPsters fancy a walk through the lake, although many still did. The flooding does not help the sand problem, however. It simply washes away the newly sprouting grass plants attempting to grow on the ever enlarging patch of dust.

In Term 1 '09, a mysterious stick of Burt's Bees chap-stick was found buried for nearly the whole term. There were no claims, though it was free for the taking. Of the same term, the Prop Comedy activity happened here until the box of chalk was discovered. Then it moved onto the stairs of the quad, then the sidewalk, the walls...and so on.

In Term 2 2014, the sand gave numerous people asthma attacks, causing the last dance to not be in Kilgo Quad but in Penn Pavilion (the dining hall).

There is a large magnolia tree behind the Sigma Nu bench. The tree's leaves and branches drape on and behind the bench. Do not throw frisbees in there lest they be eaten. Beware of falling ovaries. During one of the dances in Term 1, 2011, several second and third years were being annoying with a beach ball, so the fourth years kept throwing it into the tree. It's a tradition for TIPsters to run around the tree during "It's The End of the World As We Know It (And I Feel Fine)" by R.E.M.

This tree is also often referred to as the Mongolian Tree.

ITS NAME IS GROOT

AND THE TREE WAS HAPPY.