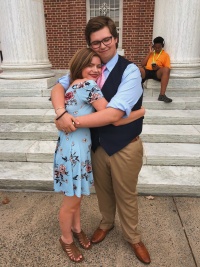 The Pastorship was started by Roberto Delgado in 2017, when he decided to start preaching random things to groups of second and third years on the quad. Originally it was to make fun of modern religion, but he would also give out advice. When the tradition was passed down to Noah Risley, they decided to make their own spin on the relic, turning the Pastor into a Duke Dad of sorts. They adopted nearly every second and third year on campus, and would give them advice. The Pastor has to be someone who is willing to meet tons of people, has amazing advice to give, and just loves helping others. It's also kind of about just being one of the loudest, and often most obnoxious, people on campus. The Pastor must be extremely outgoing but also have a kind of unique sense of humor and attitude towards religion and cliques of all kinds. Overall, Pastors are gregarious in nature, compassionate, but filled with a healthy amount of skepticism and sarcasm. It is important that the Pastor be someone without a dislike for any specific religion. Singling people out based on denomination or overall religion defeats the point of the Pastorship.

After Roberto Delgado passed The Pastorship down to Noah Risley, they changed the meaning of the Pastorship a little bit. Instead of making fun of modern religion and giving sermons, the Pastor was now a Duke Parent, helping everyone. Brooke Huffman, Duke Mom Extraordinaire, continued this tradition in 2019.