A GOD-TIER HUMAN BEING

Brooke is one of the most memeable humans that attended tip, due to her obnoxious personality and cheerful lesbian journalist disposition, as well as one of the gayest. As nice and funny as she could be, she is one friend you would definitely want to have by your side on campus. Her nicknames include: Mega Thot 9000 (Garrick), Broom (Sydney Blackwell), Lexi (Harper), Bam-it's Brooke (Megan's RAG), Weasel (Sam), Thottie Wottie (Sam), Brookie Wookie (Sam), Bean (Sam), and Sparkly Gay (idk who came up with this one but it's iconic now). 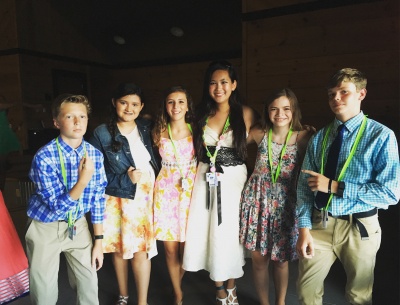 Brooke's first year as a tipster, she attended Wake Forest University, taking the class Speculative fiction. She was a founding member of the The Blue Tile and the TEAILEE, as well as being the most trusted advisor of the leader Heather. Brooke created several class memes, as well as the class' most iconic nickname (Mas the Ogre), and quickly became known as the depressing poet. Her superlative was Most likely to write a gritty action scene taking place in Starbucks, which she just so happened to write. As well as being an iconic writer, Brooke was part of TK's RAG. She was Katie's roommate, and they stayed up all night playing cards. The two were remembered for Katie chasing Brooke around the common room, and Brooke sprinting over various card games. She quickly became a Beyoncè stan, along with TK and Yaya themselves, the true queens of the RAG. This was due to their killer TipSync performance of "Who Run the World (Girls)." Her superlative was Most likely to bring Beyoncè to a cookout. Brooke also had 3 RelationTIPs that term, Zac, Nic, and Clark. Zac and Brooke weren't the most functional couple, and Nic only dated her for 23 hours. Clark had lasted the longest, and they still stay in touch. 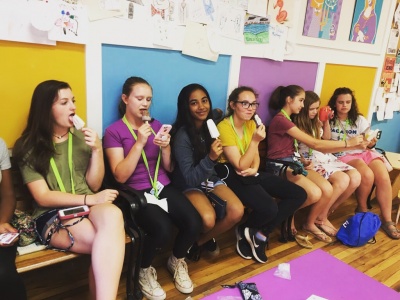 Brooke's second year as a tipster, she went to Duke East, and took the class Big Screen, Little Screen. She was a known for having 0 ideas when it came to most projects, and dating another one of the class' members for most of TIP's duration. This relationTIP however turned out to be very unhealthy, and is not mentioned by either party. Her birthday took place during this term, and to celebrate the class watched Ferris Bueller's Day Off, her favorite movie. Her superlative was Most likely to leave you in suspense. Brooke was also a member of the Basset Bros, and a true lover of Daddy B Duke, as well as the ancient art of kazoos. Brooke's roommate was Zoe, and they never went to bed on time. She quickly became a meme due to her likelihood to pass out in random places, and her memeable qualities. She could usually be found watching vine compilations with the lovely Ryan Hess, or listening to the music of Noah C. Cornelius. Her superlative was Most likely to pass out. 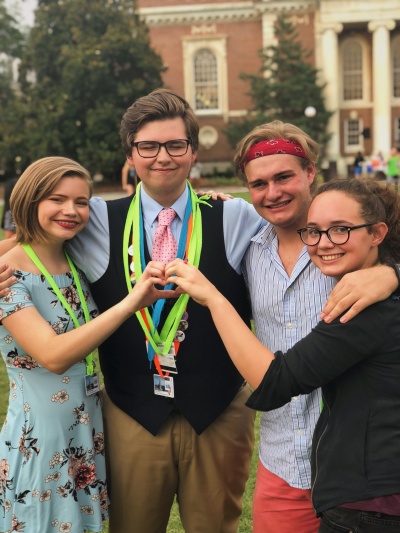 From left to right: Brooke, Noah Risley, Boden Brindell, and Braden Borbely at the last dance

Brooke's third year as a tipster, she returned to Duke East and took the class Literary License Without Limits. Her best friend since first year, Sam King, was also in that class, and they enjoyed raising hell together constantly. Rumor has it that the two of them are why their teacher, the infamous Meg, decided to give the class assigned seats. Aside from Sam, Brooke was known for trying to dissolve the awkward tension, writing really emotional poetry/stories, and never finishing anything quite on time. She also started the superlative rebellion, alongside Austin Willis. When Meg announced that they wouldn't be doing superlatives, the two got so pissed that she had to have a meeting with them in the hall. Brooke's pure fury and Austin's calm reasoning convinced Meg to bring back superlatives, so long as it didn't take up class time. Her superlative was Most likely to be an icon. Brooke's roommate this term was Stella, and the two were some of the gayest tipsters on campus, and could often be seen sporting pride accessories. While her RC Megan was definitely not awesome, the RAG bonded over their hatred of her. Megan picked the RAG's superlatives, Brooke's being simply BAM, it's Brooke. Brooke also spent a lot of time with the fourth years that adopted her, including Søren Creecy, Boden Brindell, Noah Risley, Lily Shytle, Ronald Doe, and Will Snider. Brooke was mainly known amongst them for being extremely sparkly due to her highlighter, and being the daughter/sister of Braden Borbely. Their family tree, while nearly impossible to understand, was adorable. At the end of the term, Brooke received Søren's rainbow sweatbands, The Pastorship (which became official in 2019), and the moonscream. 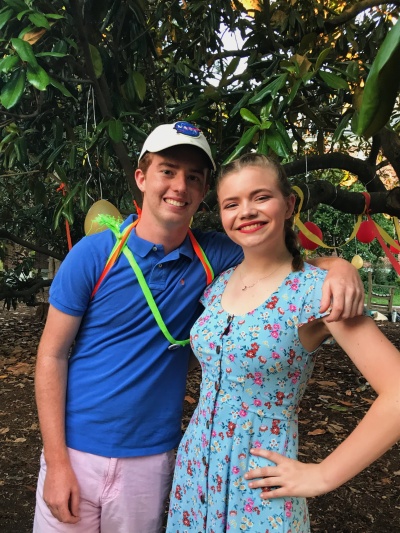 From left to right: Sam and Brooke at the last dance

Brooke’s fourth and final year was without a doubt the best year she’s spent on campus. She took the class Political Cultures and Counter Cultures alongside her best friend Sam King, and many other people she’s grown to love throughout the years including Lucy Colangelo, Lorena Watson, Katrina Csaky, John Penry, Ryan Hess, and Garrick “Blaze” Reeder. She was not the teacher’s favorite, but she enjoyed debating abortion with Will, making her opinions known, and literally every single evening study. This was also the class where she had the chance to adopt so many greenies, including Lily Martin (whom she passed the Pastorship to), Alessandro Anzalone, Grey Olsen, Kavi Pandya, Saranna Zhang, Evelyn Shapiro, and Chris Winters. Her superlative was Most likely to steal Alessandro’s Heart. She was in Ren’s RAG and was Shannon’s roommate, and the whole thing was such an experience. She enjoyed messing around with Ryan, Tate Clemons, Lily Smith, Maggie Randle, and Katherine Lawson on a regular basis, grinding in RAG meetings, absolutely crushing the Scavenger Hunt, and just being with such an amazing group of people. Her superlative was Most likely to know something Tate doesn’t know, referring to something Tate still doesn’t know. Outside of class, Brooke got the absolute pleasure of leading the moonscream every night (which she passed down to the delightful Emma Peters), playing cards on the second floor of Bassett, and having deep philosophical discussions. She was also a part of the giant wedding that took place, found on the Marriages page, and the fucking of The Cone. She loved nearly every second of her fourth year experience, winning TipSync, performing Rivers and Roads with Katrina and Iris in the talent show, and just getting to spend time with her favorite people. She will also treasure small but important memories, like eating breakfast with her fellow fourth years, the many games of Psych played, the Room 319 party, 4am American Pie, dots & boxes on the way back from Dennys, the many hiding places that she discovered on the last night, hugging Sam, and the LaCroix tower at Quadfest. You can read her fourth year will on the Fourth Year Wills 2019 page, where she explicitly mentions all of the amazing people that made TiP a home to her. She will hopefully be returning as an RC, but until then she says goodbye to East Campus.

A Quick Note from a Good Friend

Brooke is honestly one of my best friends ever and one of my favorite people that I have ever met. She is so welcoming and loving towards everyone she meets and always knows exactly what to say. She helps me fix all of my problems in ways that I never thought of and she is always willing to listen to my stupid rants about things that annoy me. Brooke has always been there for me and I could not have asked for a better friend. I am so happy that I met Brooke because of everything that she has done for me and everything that has changed in my life because I met her.

A Note From Brooke’s Favorite Child

Brooke was my very first Duke parent and will always be my favorite. My first year at TIP (2019, I was a first year/third year), she immediately adopted me and taught me everything I know about the traditions and the General Works of TIP. I was TERRIFIED of Brooke the first time I met her, and our first encounter was her asking me if I was ready and me making fun of her. I felt bad the moment after, but Brooke was much more gracious than I would have been. Brooke became one of the five people I trust most in life after two weeks, and that still stands today. I know I can tell her anything and that she will listen and offer a shoulder to cry on. And I did cry on her shoulder. Many, many times. Brooke was always there with a hug or a cuddle or a hand to hold when I needed one most and she never shied away from copious amounts of physical affection (which I still greatly appreciate). I suffered immediate and alarmingly intense Huffman withdrawal after T1 2019, and continue to suffer. Brooke Huffman is one of the kindest, most empathetic, funniest people I have ever met. I was such an insecure third year and she understood completely, offering me endless encouragement and validation. On another note, she has made me pee myself in laughter on multiple occasions. I am so incredibly lucky to have met her and I will always know that Jah’s light was truly shining down on me the day I met her. It’s been, and continues to be, a privilege and an honor. I love you, Mom #1. 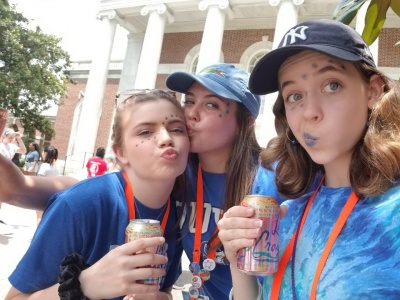 From left to right: Brooke, Katherine “The Vodka Aunt” Nikolich, and Tate Clemons enjoying some LaCroix while the fourth years won Quadfest

Brooke's family tree is Extremely complicated, but she is going to try to describe it for record keeping purposes. She was born to Soren Creecy (Moonscream, NCC Sweatband, and Cow Mask 2018), Boden Brindell (Skippy the 8th), Lily Shytle (Squiggles 2018), and Noah Risley (Pastorship and Swerve 2018) collectively her third year. Two of her parents, Noah and Soren, passed down their relics to her, the Pastorship and the Moonscream respectively. In between her third and fourth year she was emancipated from Noah for complicated reasons, although they still love each other dearly. During her fourth year Brooke took part in the Marriages of Duke East, uniting her with Katherine 'the Vodka Aunt' Nikolich, Tate Clemons (Annabeth Chase Hat 2019), Josh Rubel, Katherine Lawson (Fairy Wings 2019), Braden Borbely (Pride Flag and Squiggles 2019), Alex LaFortune, Maggie Ryals, Shea Seufert (Skippy the 9th), Audrey Goff (Thomas Hat 2019), Lily Smith (Clockwork Hat 2019), Jennifer St. George, Sam King (Watercolors 2019), and Connor Deagle (Pink Shirt 2019). Then throughout her fourth year she adopted various children, mainly Lily Martin, Josh Rubel, Anna Jones, Emma Peters (Moonscream 2020), Saranna Zhang, Kavi Pandaya, Alessandro Anzalone, Grey Olsen, Chris Winter (Skippy the 10th), and Evelyn Shapiro. I think that's it, but I'm really not sure.