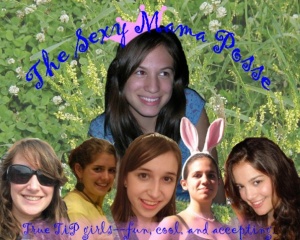 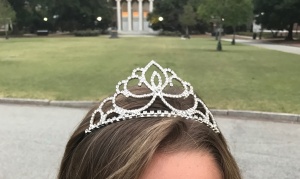 History of the SMP:

The SMP is an acronym standing for Sexy Mama Posse. The SMP is a tradition at Duke East Term II. Although the SMP existed as early as 2000, the SMP as we know it today began in 2007 under the leadership of Jessi Stewart. That year's posse consisted of, among others, Caro Ragolta, Charlie Williams, Sass Williamson, Sara Broussard, and Anna Rowe Dennis. Prior to 2007, the SMP had only existed as an informal group of friends. It was Jessi Stewart who formalized the group, set the tradition of wearing stars, and encouraged less exclusivity (setting the stage for 2009's move towards open membership to all fourth year girls). The Sexy Mama Posse is headed by the Sexy Mama and as of 2009 when the Sexy Mama–Kate Shafer–changed the Posse's exclusiveness, all fourth year girls are a part of the SMP. Today the SMP is so important because it celebrates the fourth year girls' final year at TIP, and is all about sisterhood.

The Sexy Mama (SM) wears a star by her right eye, and each day at breakfast she greets every girl in the SMP and gives them their stars, which they wear by their left eyes. The Sexy Mama is not only supposed to be beautiful, as the name suggests, but kind, open to everyone, joyful, and a role model to all girls at camp. The relic is a tiara that is passed down every year, which the Sexy Mama wears each day during camp. Unfortunately tiaras are more breakable than other relics, and have had to be replaced in the past after breaking during terms. The SM has a few duties as head of the SMP, including passing out stars, designing and ordering SMP t-shirts, organizing the fourth year girls tipsync performance, and creating a group chat for the posse. Though the t-shirts were traditionally ordered before camp and worn throughout, recently, the shirts have had to be ordered during camp and worn afterwards as a reminder of the joy of fourth year sisterhood.

The SMP and Spirit Week:

Boys are not generally welcomed into the posse, however in 2010 the Sexy Mama, Analyssa Lopez, began giving stars to the boys who were dressed up as girls on Wear a skirt Wednesday and for Miss TiP at Quadfest. It should however be noted that certain members of the male set, most notably Aaron Shinn, were seen wearing SMP stars on Wear a Skirt Wednesday a year earlier in Swine '09, but it was far less widespread than the movement in 2010. Cat Gallagher continued this tradition, giving stars to any dressed up boy who wanted one on Wear a Skirt Wednesday. The Sexy Mama also has black stars, to be worn by the SMP on Emo (or Grunge) Monday.