Zoë Ganter did her first year at tip at Trinity Term 2, and took the Speculative Fiction class. For her second year, she went to Duke East Term 2 where she took the class Criminal Minds. She bonded with the “no chill” squad including Caroline Webber, Megan Olomu, Kate Lee, Elizabeth Hepburn, Griffin McCombs, Chris Rosselot, Nick Fogg, and Nick Woodman. Her third year, she returned to East Term 2 where she took CTA and made many new friends. At the end of her third year she received the tradition of Sexy Mama from Grace McKenney. As soon as Zoë arrived on campus for her fourth year she immediately began the (sometimes difficult) tasks of being the Sexy Mama. Within an hour, she had already begun handing out stars to all the 4th year girls she could find, making sure to include the newcomers as well. Not only did Zoë look beautiful in her tiara, but she perfectly fit all the criterium for the tradition. Zoë was inclusive, determined, creative, and loving in general, allowing her to lead the 4th year girls in what had to be one of the best Sexy Mama Possies ever seen. She successfully organized both the TiPsync routine and the t-shirts that were made, which was widely appreciated by all of the girls. But Zoë is much more than her tradition. She is the kindest, funniest, most selfless girl you will ever meet. People like Zoë are the reason that TiP is such a memorable, happy experience. In terms of the specifics, Zoë’s closest friends at camp included Hannah Stone, Claire Stagner, Caroline Webber, Daniela Garcia, Liz Hepburn, and Abigail Wandoff. But basically, Zoë was friends with everyone. There wasn’t a single person she couldn’t start a conversation with. She took Philosophy of Time with Daniela Garcia and was a role model to the younger tipsters in the class. Some of the most memorable moments Zoë had with her friends during camp include all of the dances, ninth street endeavors, the night of TiPsync, doing Oh What’s Up with Hannah Stone on Frat Boy Thursday, RAG nights with sushi, spreading her obsession with Game of Thrones, and of course passing on her tradition. Zoë decided to give the impressive role of Sexy Mama to Lucy de Lande Long, a beautiful, kind, unique girl who wholeheartedly deserved the honor. Zoë often told her friends that she had a gut feeling Lucy was the right choice, and when she started writing a letter to her explaining why, she was certain that she had made the right decision. While it will be hard to top the poise with which Zoë handled the “crown,” if there was ever a girl that could come close, it would be Lucy. By giving Lucy the tradition, it once again shows that Zoë was the best Sexy Mama 2017 could have had. Zoë may have been one of the first people to leave on the last Saturday morning (the bus boarded at 4:30 am), but her legacy at Duke East campus will certainly live on for a long time. The friends that she bonded with while at camp were touched by her compassion and kindness towards others in addition to always counting on her if they needed a laugh.

Known by most as the 2017 Sexy Mama, Zoë Ganter loves TiP and everyone who has every walked onto Duke East with all her heart. Not to mention beautiful, she is inclusive, kind and open to everyone. She embodies everything that the SM stands for. Throughout term II of 2017, Zoë could be found passing out stars with a smile on her face, wearing the tiara with pride or sipping a pink smoothie on 9th street with Hannah Stone and the rest of her beloved friends. Speaking of, Zoë formed many close friendships throughout her time at TiP. Daniela Garcia (2017 LM) is like a sister to her and they led the fourth year girls with poise and genuine kindness. They helped make the 2017 SMP the family that it is today. She also played an important role in choreographing the 2017 SMP TipSync set to Toxic and When I Grow Up. After camp ended, many members of the SMP, including Zoë, could be seen wearing the cute SMP shirts designed by the SM herself. Through her tears, she gave a touching speech during the talent show traditions and passed down the beloved tradition of SM to Lucy de Lande Long. 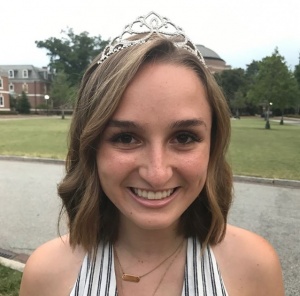