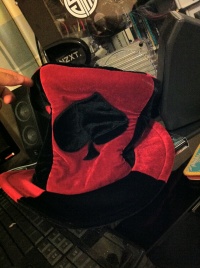 (Note: while reading this, pretend you are either Helios from 300, or Morgan Freeman)

Long ago, in the mid 1990's, a boy sat glued to his living room television set with a glimmer of glory in his eye. Still high off of a thirty-minute Thundercats session, the boy prepared to enter the realm of the Superfriends, and join them on a mystical adventure. The boy saw Batman's cunning, The Flash's speed, and Wonderwoman's queer little lasso, but it was a greater man who caught the boy's eye. That man was known as SHAZAM. He wore a ridiculous, star-spangled-banner jumpsuit. He had platform shoes. He had an afro that dwarfed his massive body. And he spoke jive. SHAZAM was all that is man. The boy dreamt of hearnessing SHAZAM's power for himself. For ten, long years, the boy slaved over this quest, pouring his blood, sweat, and tears into his project until one day, he solved the mystery. The boy, now a strapping lad of seventeen, blessed two items with the spirit of SHAZAM-- a pair of track spikes, and a top hat. The boy took these holy relics with him to TiP for his final year in an effort to burn his name into the tome of eternity. When that was done, it came time for the boy to part with one of these blessed entities, for he knew that no man should bear the whole burden of SHAZAM. He chose one boy, a third year with the stregnth and honor to up hold the ideals set at SHAZAMFEST, who would in turn pass down the relic to another worthy contender under him.

He who wears the SHAZAM HAT need not be the most "TiP" or popular cat... But he must be the most jive-ass turkey.

Ethan's questionable judgement led him to give the Shazam Hat was given to Ryan jeong in 2007. However, Ryan went to Duke West and Ethan was determined to have the Shazam Hat be a Duke East tradition. Ethan asked that Ryan give the shazam hat to Alegro Nwanneka Godley, so that he could pass it on to someone at east. However, Ryan and Alegro never met until the last night of TIP. Fortunately, Chester Chambers and some friends met Ryan at a gym on West campus, where Ryan gave them the hat. Chester then gave the hat to Alegro, as it was rightfully his. For his efforts and all-around pimptacular abilities, Chester received the hat on the last night of TIP.

Passed down in 2008 to Chester Chambers.

Wearers of the Shazam Hat