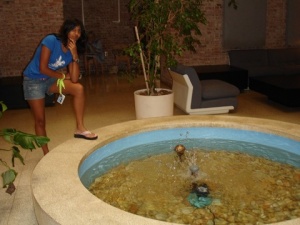 The fountain in Biddle.

Biddle is the one building outside of the Duke East quad that you are allowed to visit, during 4-5 free time. It is also home to the music practice rooms, which can be used during free time from 4-5 weekdays. They're soundproof rooms that you're allowed to be in with someone else... with the doors closed. The RCs don't really care about what happens in Biddle, if you catch my drift. However, some student were forced to leave after things he did with other TIPsters in the music rooms. It also has a really cool fountain! In 2005, it was home to during term one, and PILF and SEL during term 2. In Term 1 2006, it was home to Enlighten Me! and . Getting to Biddle late on the wrong day can be quite hassling as the doors lock automatically, leaving stranded people to try and attract the attention of classes through the windows.

At Term II 2005, a feud arose between PILF and SEL due to conflicting themes of the two classes. SEL, is, of course, a class about money and capitalism. The PILFers (PILF standing for Philosophy in Literature and Film), on the other hand, spent two days learning about Marxism. PILFers became very passionate about rising up against capitalism and sweatshop labor. The feud started off when the PILFers left a quote from Marx on the door of the SEL classroom (although small squables over couches did occur before this). The quote said that "This makes money the universal whore and universal pimp of men and peoples, a kind of garbled language in which all human and natural qualities are scrambled and inverted, and anything can be magically transformed into anything else." The feud escalated when SEL was doing their lemonade stands in order to raise money for t-shirts, PILFers approached their stands asking them where the powder from their lemonade was made. A favorite line was "How old was the little Malaysian girl who manufactured that lemonade?" SEL students became aggravated and worried that PILFers were losing them business (although many PILFers purchased lemonade despite their reservations about it). However, the straw that broke the SELers' backs was when Tyler aka AC/DC, a PILFer, went into the Union and emerged with 3 glasses of pink lemonade, proclaiming loudly "FREE LEMONADE UP HERE!" The SEL teacher proceeded to knock the cups out of his hand and yell at him, "You Communists can't do that stuff here!" PILF left SEL alone after that, but the feud was not forgotten.

Present-day update: The feud certainly was not forgotten as PILF takes another rude offensive attack on the SEL page. Those who visit often will notice quotes appearing and disappearing on the class' pages

On the bottom floor of Biddle (where the Band Campers eat their sandwiches and drink their red Hi-C) is a fountain with stones in it. It's not on half the time but TIPsters are supposed to stay far away from it. Reasons cited by the not-so-administration include vandalism, distraction, hand-rail destruction, and "accidents" including, but not limited to, impalement. Naturally, TIPsters are drawn to this Fountain of the Temptation of Youth. On the last day of PILF '05 term 2, several PILFers (specifically Anshu and Caro) walked around in the fountain and splashed people. In addition, SEL took an awesome group picture around said fountain that can now be seen in the East II 05 Termbook. (N.B., the railing was not, at any time, actually unstable or broken. There was not a single PILFer lost, nor were any SELers eliminated, during Term II. Rumors of an unfortunate amoebic parasite resulting from indulgence in the Band Campers' snacks were, upon examination, completely unfounded.) Also, during Term I 2006, the fountain had two rubber duckies in it that would drift apart and then come back together every day. But, students were appaled when the ducks dissapeared on the last day.

The Tale of Biddle's Revenge

Once, long ago in East Term II of Swine '09, there was a SPY 101 (cryptology) class filled with a group of delightful yet suspicious Tipsters. The tale goes, that these tipsters were confronted with yet another evil besides the coughing of swine flu and the ear infection of one of its members. Everyday the tipsters were bound to be confronted with an army of spiders. The tipsters were like any logical thinking teenagersds, deathly afraid of these foul beasts and tried to remove them with ingenious lures involving notebooks and sprints to the outside, while their much more fearless teacher took to picking up spiders in his bare hands and tossing them out the window. These dreadful foes kept coming and coming and finally the cryptology class found the only logical conclusion available, the ghost of Mary Duke Biddle was sending these spiders to attack them. Mary Duke Biddle was, according to the reputable source of a sign under her portrait, passionate about music, so she would naturally bear a grudge against tipsters working out ciphers in her musical classrooms. The Spy !01 class, except for Sam a fourth year who became desperately in love with Biddle for reasons entirely unknown, tried to appease the angry wraith by sacrificing rice crispy treats to her and by encrypting her name in a plethora of ciphers. The spider attacks, however, did not stop, but soon TIP did due to the despair of Swine '09. On the last day with much of their class in quarantine Spy 101 decided to forget creul Biddle and tried to keep llove alive in East by sneaking into other classes and performing other spectacular feats. When the class had to take their photograph for the term book they placed themselves in front of Biddle's potrait as a final act of reverence towards her. Then they re-watched National Treasure II, exchanged emails, swore to remember the llove and left Biddle for the last time.