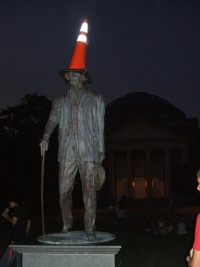 Benjamin Duke with a safety cone placed on his head during term II 2006.

The decoration of the Benjamin Duke statue is popular during Quadfest to demostrate dorm spirit. Generally the statue is decorated with the color of the decorator's respective dorm, although many times the statue is decorated with non-spirit related items as a prank or offensive gesture. For any future TiPsters who wish to dress up B. Duke in the morning, the ideal time is 6:31, as the sprinklers turn off at 6:30 it is still somewhat dark at that time. Also, bring a towel to dry B. Duke off because he is typically soaking wet and it makes it quite difficult to dress him if he is dripping. Also, make sure that someone stays behind to keep the door propped!!!

Battles over the statue's clothing during Quadfest are common.

Note: During Term I 2011, people at Duke University got very angry at Duke TiP for allowing decoration of B. Duke, going so far as to fine the camp. Thus, Term II kids were fervently banned from decorating the wonderful statue.

Benjamin Duke with a toga. 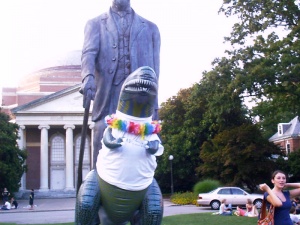 Quadzilla, with B. Duke behind.
Retrieved from "http://www.tipwiki.net/index.php?title=Decorating_Benjamin_Duke&oldid=67001"