Toga Tuesday is a Spirit week tradition in which TIPsters dress in the style of the people of everyone's favorite fallen Western empire — Rome. There were wide-scale attempts at resurrecting this tradition was at East II 2002, however, only a few dedicated TIPsters continued to attempt it at East II 2003 and 2004. Toga Tuesday was revived during East Term I 2006 on the third Tuesday of the term, led mostly by Madison Pollock and Rivers McKenzie. Toga Tuesday continued through East Term I 2007 and 2008. Unfortunately, however, at East II 2009, Toga Tuesday was forced to become Toga Thursday due to the Swine Flu outbreak that forced the term to close prematurely. TIP East Term 1 brought it back! There was a separate revival at Davidson Term I in 2007. A large mob led by "Toga-God", more famously known as SoBe, "Toga-Jesus", and "Toga-Titan", was led through the halls resulting in minor property damage and the staff having a large headache. As of 2012, it is definitely a Spirit Week staple, and will continue to prevail as the clothing of choice on the second Tuesday of term.

It all started back when one ingenious fellow decided that he could save money and fabric by allowing his bedsheet to double as a garment. Before too long, this was adopted as the primary form of fashion among citizens of a very powerful kingdom. A few thousand years later, another ingenious fellow decided to follow in the footsteps of his long-deceased, fashionable forefather. He realized that, in addition to saving money and fabric, this style of dress also saved space in a suitcase, which, in turn, saved even more money and fabric, making this manner of dress even more practical than ever before!

This fashion began, once again, to catch on as the predominant style among citizens in the then-most powerful political entity of the world, that of the Llamarian Empire. As with all great forward societal movements, however, there will always be those dissenters, determined to do nothing but cause pain and suffering towards those who are so quick to advance their lines of thinking. Through some foolishly unencrypted transmission of strategy on the part of the Llamarians, these so-called Enforcers of the Code became aware of an upcoming parade and vowed to put an end to it, no matter what the cost. Of all days, that on which they chose to make their attack was the Llamarians' ever-so-sacred Toga Tuesday.

That would be the Enforcers' last mistake.

On this, the most hideous of all Toga Tuesdays, the Enforcers walked the streets, patrolling openly in the Eastern Llamarian territory, asserting their illusion of power. Though this effrontery was not quite such a mockery of a Holy Day as was the dreaded Wear-a-Skirt Wednesday attack of the Swine, it was still unacceptable behavior. As a result of Enforcerian oppression, Llamarians male and female alike found themselves wearing cotton vestitures under their sacred raiments to appease the relentlessly sadistic will of their deluded overlords. The foolish Enforcers blundered in their calculations, for they failed to take into account the fact that the Llamarian people is a strong people and one intolerant of such injustice and utter disregard and disrespect of tradition. There was a resistance. Led by an individual known only as The Godfather, this underground association vowed to take back the rights that they had been granted by their plastered Creator and to spread the newly-regained freedom far and wide.

Upon first being confronted by these oppressors, the Resistors were defeated. They were forced to retreat to their barracks as if they were planning to don the accursed doublets, submitting to the demands of the Enforcers. Instead, however, they fled to the only true source of ancient wisdom: the renowned Lillian Archives. There, they sought out the advice of many a great thinker past and made physical note of their testimonies.

Once again, the Resistors were discovered by the Enforcers. This time, however, they were prepared. They summoned forth their newly-researched assurances that the definition of a tunic, as they were supposed to don, was merely "any garment that covers the upper part of the body". As such, in romping about in their togas, they were, in fact, wearing "shirts". The Enforcer captain was not amused.

Knowing how to play the game, the Resistors again seemed to surrender. When their leader returned to Enforcer judgement, however, he was wearing the most vile, degrading, skin-exposing excuse for a doublet any half-sane creature could ever imagine. Though it had no sleeves, nor cover of the cleavage, no opacity, and no extension lower than the breast, it was a tunic if ever there were one, and he therefore could not be further prosecuted. The enraged Enforcer, too proud to admit defeat, looked the other way. 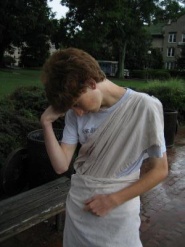 A TIPster sporting the Flora Fold.

The most well-known method was taught to TIPsters by 4th year Brett Flora, and is therefore named the Flora Fold.

Take your bed sheet and two safety pins (you can set those to the side for now, we'll use them later). Hang the sheet loosely over your shoulder (left or right, either shoulder will work EDIT- ACTUALLY, THE HISTORICALLY CORRECT WAY IS TO WEAR THE TOGA ON THE LEFT SHOULDER, thats how the Romans did it guys.). Grab the end of the sheet that is hanging behind your back by the corners. Now, grab the sheet's left corner in your left hand, the right in your right, and pull the two corners until they meet in front of you. Hold those corners in place and do the same with the end of the sheet that is still hanging in front of you, unfurling it around your body. Now it's time for the safety pins: on either side near the corners ensures that the toga will stay on your body correctly. This design even creates the nifty toga sleeve as seen here.

There is another less known design that doesn't involve safety pins, but is more restricting to movement. Start by holding the ends of a longer edge in your hands with the sheet behind you. With the corner still in your hand, place your left hand on your right shoulder and your right hand on your left hip. If you are proficient in knots and have flexible shoulders, you can tie the two ends behind your back. If not, ask a friend to tie the two ends together with a square knot.

There is also a third, even less known method that is somewhat uncomfortable, but incredibly easy, and also that lasts all day. It's pretty similar to the method above, but not the same. Start by taking a corner of the sheet and putting it over your left shoulder. (The sheet should be horizontal.) Leave lots of fabric with which to tie the know at the end. Then hold it in place with your right hand while having a friend wrap it around you. Do as many full circles with the sheet as you can, and then take a sufficient amount of corner fabric and tie it to the original corner fabric, preferably on your shoulder, but if not, on your back. Avoid tying it in front of you. (And by giving instructions to you, I mean have your friend do all of this. It's a partner activity.) 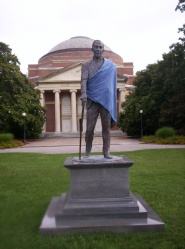 Toga-ing Ben Duke is another matter entirely, seeing as he is around eight feet tall and one of his arms is melded to the side of his body. To toga Ben Duke all you have to do is wrap a sheet around him from his right shoulder. (A note for the wary: the OSC doesn't always appreciate this gesture, so if you take notion to toga B.Duke, beware that your sheet may never be seen again.)

Furthermore, B.Duke doesn't always appreciate being toga'd, beware his wrath if you are the one to put it on him. He has been known to lead TIPsters into the bush and create thunderstorms.

In Term II 2007, however, the Superman sheet used to toga B.Duke remained on him all day long, even through the night and into the next morning. Then-fourth years Sara Broussard and Maggie "Faith" Killman may or may not have been responsible for the togaing.

In Term II 2008, B Duke was not toga'd due to the new rule that no one is allowed to touch B Duke or they will feel the wrath of the staff. This was a sad day at Duke East. It remains to be seen if B. Duke will be stable enough to handle minor physical contact in 2009.

In Term II 2010, even though tipsters were not allowed on the quads, B. Duke was mysteriously found sporting a toga when the morning runners left their dorms. The toga was likewise removed in an unseen fashion that night. B. Duke silently encouraged both the 2nd and 3rd years to join in on the spirit day, as none of the green lanyards had ever experienced the day. Toga Tuesday that year was a great success. In fact, multiple classes rode the bus to Duke West Campus that day, many members sporting togas.

During 2008 and 2009 Term 1 on West Campus a single loyal TIPster called SoBe would participate in Toga Tuesday.

Duke West Term 1 2010 however, Toga Tuesday was done in mass for the first time ever on West Campus. Organized by it is the first occurence of multiple Westies wearing Toga's on the famous day. Ty printed flyers advertising the day and then preceded to print them out and tape them all around the dorms. Former TIPster Mike Flora and former TIPster and current RC Sam Warlick were pictured on the flyer togaing B. Duke. This tradition has continued be carried on in recent years in 2016-2017 fourth years have kept this tradition as well as wear a skirt Wednesday alive, by completely ignoring the themes the RCs set in place and wearing togas. The fourth years passed these traditions to other second and third years and hope that they will keep this great tradition alive.