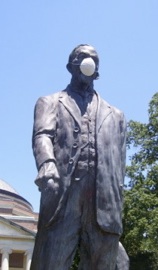 Yeah, it was that bad.

Swine Flu was an evil demon that plagued TIP in 2009. One that could not be seen, but brought pain to the entire Duke East population. It had all started in Mexico. With a pig. And a Mexican taking care of that pig. Before long, the Swine Flu (or H1N1 virus) was born, spreading throughout the world. Eventually, the monster made its way to East Campus, plaguing the Tipsters. The epidemic peaked on July 22, 2009, when Term II kids from East Campus were sent home (it should be noted that it was on Wear a Skirt Wednesday). Although TIP was not directly involved in deciding to send people home, it still sucks. Especially for the fourth years. Rather than bash the Swine Flu on various Tipwiki pages, we ask that you bash it on this page, so that we can all join in our hate for the flu together.