This page is under construction. Please help by adding and elaborating with any facts, myths, or opinions that you may have on the matter.

Cally! (aka- "the other Callista," "the Patron Saint of Jamaica," "the hippie," etc.) would have attended Davidson had she not been lax in applying. As it went, the only class with room left by the time her forms were received was . The graciously offered a space to her. She graciously rejected it.. some other, more mathematically inclined TiPster made better use of it, no doubt. She went on to attend Term II at Duke East for the three TiP-years left to her. In 2010, she returned as an RC at Duke East, serving in Brown. And, yes, she spells her name with an exclamation point.

She first attended TiP in 2005, and it quickly blew her mind. She attended : The Dystopian Theme in Literature and Film under the instruction of Pavla and Lassett and lived in Alspaugh. During this term Cally! roomed with Tara, who it turned out was just as much a Beatles fan as she. It was from this session and this RAG that the term 'bunny' originated. Cally! frequently haunted the bench in front of Alspaugh (which was then painted red and gold in the fashion of an alcoholic beverage label) in the early hours of the morning reading "The Da Vinci Code" and wishing she had colored pencils to match the sunrise. Her free time was often spent on the G-Spot. It was while on the G-Spot one evening (following a rousing round of the Penis Game) that , appointee of Jesus, dubbed her Patron Saint of Jamaica. In her class's production of Dracula, Cally! was the vampiric watermelon. Among her closest cohorts were , , (aka Carol Soules), and Batman. She was frequently reprimanded for dancing in the rain during thunderstorms. 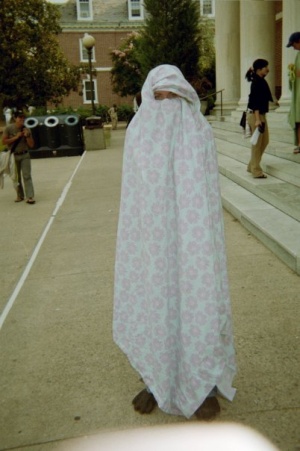 Cally! in her purple-daisied hijab and gorilla feet

Cally! attended Abnormal Psychology under the instruction of Dave and . She lived in Pegram 202 (see the dorm's page for an account of the room's hauntings) with Alyssa Fowers. It was during this year that Cally! first met Fat Tony Giovanni, with whom she has maintained an on-off pseudo-romance ever since. Also during this term, the rasta beanie which Cally! wore all day every day for her time as an official TIPster (except when borrowed and/or stolen by other TIPsters) was placed upon B. Duke's head by . There is photographic evidence of this event. Over the course of several Chilling on the Quads, Cally! became known for her artistic aptitude for tattoos rendered in Sharpie. Of particular note is the full sleeve with which she adorned Christo Waters during the third week. During the Llama Escapades of 2006, Cally! was an active participant in the campaign to have the dear icon returned to her people. She wrote love letters to Sam Prevatt entreating the Llama's release, arranged a sit-in outside his office when her letters went ignored, and ultimately led a band of TIPsters to invade his office when the sit-in was stepped over. Sam told the posse that if they could get 2/3 of all TIPsters to congregate on the Center Green at 4:30pm then he would release the Llama. Despite a prodigious poster campaign and individual visits to every TIPster's room, Cally! and the other members of the Llama Freedom Front were unable to garner enough support to negotiate their dear idol's freedom.
Cally! was present for all the events leading up to the birth of Vermonster, including the initial consumption of ice cream that once filled his domicile, and as such is his official Godfather. (Isn't it lovely when a potentially insulting situation births something as profound as Vermonster?) She encouraged the adoption of Vermonster as a new TIP tradition in response, partially, to the general Llama-apathy of most TIPsters in light of the repulsively cliquey nature of the year's Llama Posse. She encouraged the companionship of because she is a whale-loving hippie.
This year Cally! was also embroiled in a drama of romance, aerosol, and similar intrigue that ultimately resulted in two whole TIPsters being sent home early. The moral of the story is dual: follow the rules (within reason) and don't get too invested in relationTIPs.
Cally!'s faux snakeskin, knee-high, platform boots made their first appearance this year: incorporated them into his Wear a Skirt Wednesday attire.
Keeping with the idea of slightly non-traditional takes on TIP traditions, on Toga Tuesday Cally! wore her sheet in a hijab fashion and incorporated a pair of latex gorilla feet.
Among her closest cohorts were Lluke Chizek, Rachel Watson, Christo Waters, , , Melissa "Luke" Hibdon, Anthony Chivetta, Matt Goldberg, Jazz Johnson, BlondJohn Hamilton, Taush Sampley, and Alyssa Fowers. She rolls deep.

In 2007 Cally! attended and lived in Bassett. She was among those students who, when not ruminating about the nature of sanity and the possibility of a pink elephant crashing through a wall to kill at any moment, innovated the Communist lunch.

Legend states that Cally! crashed a dance at TiP during her 5th year.

In 2010 Cally! returned to East as an RC. During Term 1 she lived on the second floor of Brown with a lovely group of 3rd year girls who called themselves the Cally!flowers, consisting of: Marissa Ross, Eddi Decourte, Anna Democko, Kristen Bagley, Caroline Wallace, Vanessa Fu, Claudia Esquival, Maddi Hill, Rachel Shepherd, Angela Song, Morgan Young, and Annie Ma. The RAG was also known for its many pets/adoptees. These included Cheng-wei Lo, a second year boy who lived with the neighboring Gabe's RAG; Cesario Alejandro Wallace Jr., a cockroach lost in the Union by Caroline; a free-range rabbit; an imaginary bat; Oblib; and several others.

Cally! monitored a group who called themselves Cally!'s Creepers during Term 2. The group got their name because many members would be creepers. They invaded Cally!'s room when she wasn't there, look in her closet and followed that with puzzled faces while Cally! was in her room, and many other things. Several of them even invaded her room on the Last Night. Cally!'s Creepers consisted of Jaclyn (Lynny) Zhou, Erin Reilly, Erinn Crider, Victoria, Erin Savage, Ellie Sell, Sujaytha, Savannah Holmes, Kaya Gingras, Emily Smid, Vivian Ramirez, and Karishma Daftary.

Remember that time Cally had a water balloon fight in Brown and was told that she would not be rehired at TIP ever again? True story. Although this is sad, it is mostly due to the condom involved in the fight. Matthew "Vanilla Bear" Gerrish purchased this in the bottom floor of The Marketplace and it is not contraband, so not rehiring seems unreasonable. Of course it may have also been just because she started a water balloon fight indoors.

Cally! also took a lot of photos, and in a majority of them, the vic- I mean, subject, was not aware that she was taking a photo. She also excels at creeping, so she will get a picture of you when you least expect it. 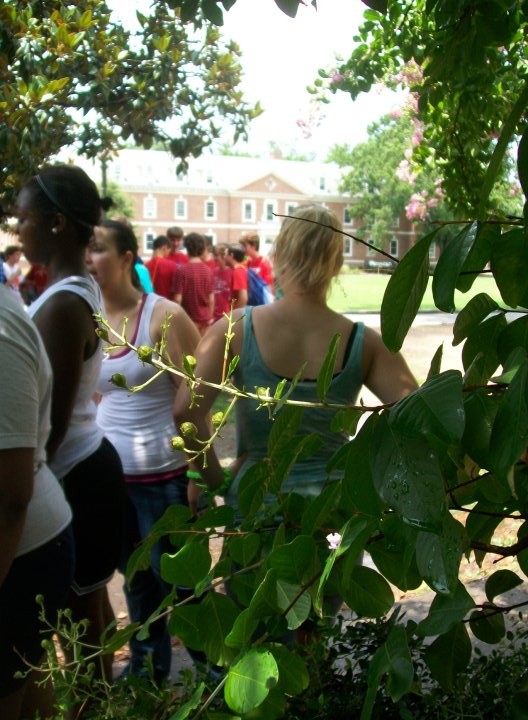