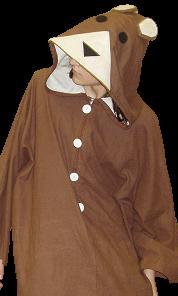 Batman aka Zak is an amazing TiPster that attended his fourth year in 2005 at Duke East Term II. He attended JAVA for Video Games and resided on 3rd floor Pegram.

His main capabilities include:

This name was assigned because every day of the term he wore a cape and hat with bat ears.
One story that particularly illustrates his resemblance to the superhero is as follows:

While Zak and I were walking from Pegram to the Union one fine day we passed an adorable little boy, probably about four years of age, on a tricycle. His parents were some way behind him, casually strolling along and enjoying the beautiful weather. As we passed the youngster his eyes grew big and his jaw dropped. He then dismounted and went running back to his parents, shouting "Look, it's Batman!" The incident became a popular anecdote for the remainder of the term. --Cally!

Zak stubbornly refused to participate in any of the dances; he approved neither of the DJ's style nor, choice of music. Instead, he sat at the side of the quad listening to his own mixes; his trade name is Son Zohan. Occasionally at the persuasion of others he would briefly perform some of his break dancing skills. Although he can not physically return to TiP he is not forgotten. Reportedly many conversations regarding him took place in the Term II 2006 at Duke East.