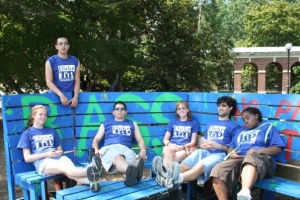 TIP staff on the Bassett bench in 2007.
Benches are wooden benches made of wood which are placed in front of each dorm. Each year, they are painted by Duke students. The benches get burned during the school year by Duke students after basketball wins against UNC which is why the decoration and sometimes the entire bench is different from year to year. They normally have some picture and a witty slogan painted on them, such as "BP: Bassett pride, Its where we get our Busch" or "Wilson: Y'all Ain't Got Balls Like These," and, my favorite, "Aycock: Is it in you?" While sometimes infested with bees, mud daubers, ants, spiders, and other insects, they are really quite comfy. The most famous is the G-Spot, not only for its name but also because... well, it's called the G-Spot for god's sake. And it has a foot rest, which is nice. Be nice to the benches. They sometimes like to break, and then you cannot sit there anymore, even if it is funny.

As a general rule, the Pegram benches tend to be the most artistic, often paying homage to great painters such as Vincent van Gogh or Salvador Dali. Giles is generally the most boring of the benches, often simply saying "Giles" with no aesthetically-pleasing elements. Alspaugh's bench seems to generally include alcohol references. Lastly, Aycock's bench is almost invariably decorated with a witty double entendre involving an inTIPpropriate use of the dorm's name.

The G-Spot disappeared mysteriously during term II 05, due to termites in the bench.

Just as a general warning, it's not considered a smart idea to stick your scan card into the slots between the boards if you have your shoelace attached to any part of you or your clothing. An unfortunate, somewhat accident-prone TIPster did this during Term II 2003 and, after jumping up to attempt to retrieve a frisbee, forgetting the fact that her shoelace was attached at one end to her belt loop and at the other end to the bench, involuntarily bungee-jumped off of the Giles bench. Ripped pants and an enormous bruise on a forehead ensued. Just don't do it.

In 2007, Aycock's bench had silhouettes of people with the words "Aycock Hanging Out" on the footrest. The obvious innuendo of this made many a TIPster laugh. By 2008, Aycock had been painted over to just say Hanging Out, but not well enough, so one could still see the outline of the word Aycock.

During Term I in 2008, a TiPster named Scott Andrus was accused of breaking the Bassett bench, when really he had done no such thing, as it was actually the fault of a bunch of second-year girls.

At the beginning of Term 1 2009, there was no bench in front of Bassett, only a desk chair with a piece of paper saying "Bassett Bench" on it. This chair disappeared after the first day, leaving only a bench-sized void in the heart of TIPsters. After two weeks, on the Sunday after Quadfest, TIPsters awoke to find that the Pegram bench had been inexplicably moved in front of Bassett by a combination of night-roaming leprechauns, fairies, and angels, or, perhaps, RCs. 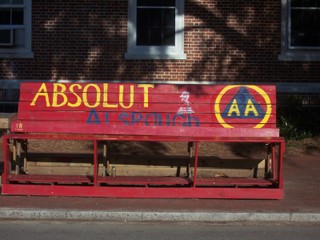 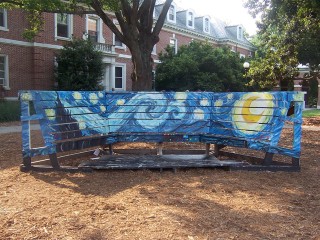 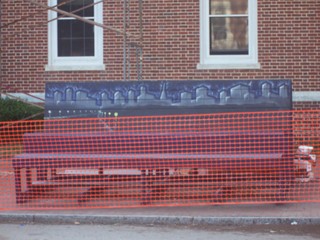 Brown in 2008 (inside the Construction Zone)