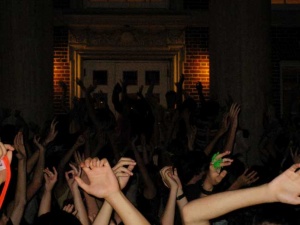 TIPsters at Duke East doing the dance. Note that only the raised arms of TIPsters are seen here.
The Time Warp is a song from the 1975 cult film The Rocky Horror Picture Show. Dancing to it is one of the oldest TIP traditions, dating back to 1982, TIP's second year and its first on East Campus. This song has traditionally been the last song at every TIP dance, but may have been moved to the third-to-last position in recent years. Even when the second dance at East Term I 2006 was ended for lightning, the Time Warp was played anyway. In 1990, the staff decided not to play The Time Warp, the students refused to allow this and proceeded to perform the entire song (with dance moves) a capella on the steps. Order was restored to the universe.

At East Term II 2005, the last dance had to be moved inside the Union (East) due to a severe thunderstorm and lightning. The Time Warp was played (rather quietly) and all the sad fourth-years attempted to perform it enthusiastically. Because they got such a raw deal, the RCs played the Time Warp again on the last night after the talent show, inside Baldwin, and all the fourth years got onstage and did it for the last time. Thus, it is not only done on the steps of the Union, depending on the circumstances.

On East campus, the dance is done on the steps of the Union, facing the quad. The 4th years lead, facing the Union, on the pavement, not the steps, in the way that the staff lead Yatta. The leader of the 4th year leaders should be someone who has seen the movie many many dozens of times, knows every word and the correct dance, and can put actual emotion into it. If at all possible, this leader should collapse at the end of the song, much like the Transylvanians in the movie do. Be careful not to get trampled, however. For help, see the movie or Peggy Nelling. At East Term II, all TIPsters, including fourth years, usually stand on the Union steps facing the same way, and most people collapse at the end.

The dance to "The Time Warp" is a hotly debated TIP topic between campuses. It is as follows, synchronized with the lyrics (updated 2014):

do (left fist up)

do (left hand up; right hand down)

the Time (right hand up; left hand down)

The Transylvanians do the Time Warp in The Rocky Horror Picture Show.
On Duke West and Duke East, the dance is usually:

do (left hand up, palm forward)

the Time (rotate right hand so back side faces forward)

Warp (rotate left hand so back side faces forward)

Some will insist that the dance actually should be:

do (left hand on right hip)

the Time (right hand straight up)

At Texas A&M, the song is preformed after American Pie, and after the song is over everyone falls down and the dance is over. Then the TIPsters are dismissed and announcement are made.

One verse of the song appears twice, and it is the only other part of the song to have specific dance moves associated with it. It is as follows:

And a step to the right! (move right foot out to the right and back to the left to meet the stationary left foot quickly and repeatedly until the next line)

With your hands on your hips... (hands to their respective hips, elbows out, making a triangle; on East and Davidson and West, yell "Your hips!")

You bring your knees in tight! (knees together until they touch, feet do not move)

that really drives you insane! (hips move in a circle for the word 'insane')

That portion of the song is followed with the campus's variation of the dance for the line "Let's do the Time Warp again!"

Believe it or not, the most hardline traditionalists will be founding stomping in time with the claps as well. Don't let the marble Union steps on East stop you!