Astronautical engineering is one of those classes you take if you are very serious about learning. You will cover many different topics pertaining to and used by rocket scientists including math, engineering, and problem-solving. Also, Astronautical Engineering has one of the best field trips at Rice as you get to go to Johnson Space Center.

This course is VERY math intensive. You will be learning matrixes, derivatives, orbital mechanics, n body problems, the math behind propulsion, some trig, vectors, conics, dot products, cross products, etc, etc, etc. If you've only taken algebra one, this might be too much for you, but we are TIPsters, and TIPsters are all about challenging ourselves :). Be warned: bring a graphing calculator, you definitely need one, even if the course materials list doesn't say you need it. Also, it would probably be helpful to have taken some sort of rudimentary physics course. The course name is Astronautical Engineering, but in reality, it should probably be called Space Physics, since most of the material is just orbit physics and things like that.

Astronautical Engineering was a loving family this year. An unbreakable bond was formed. A family tree is shown here 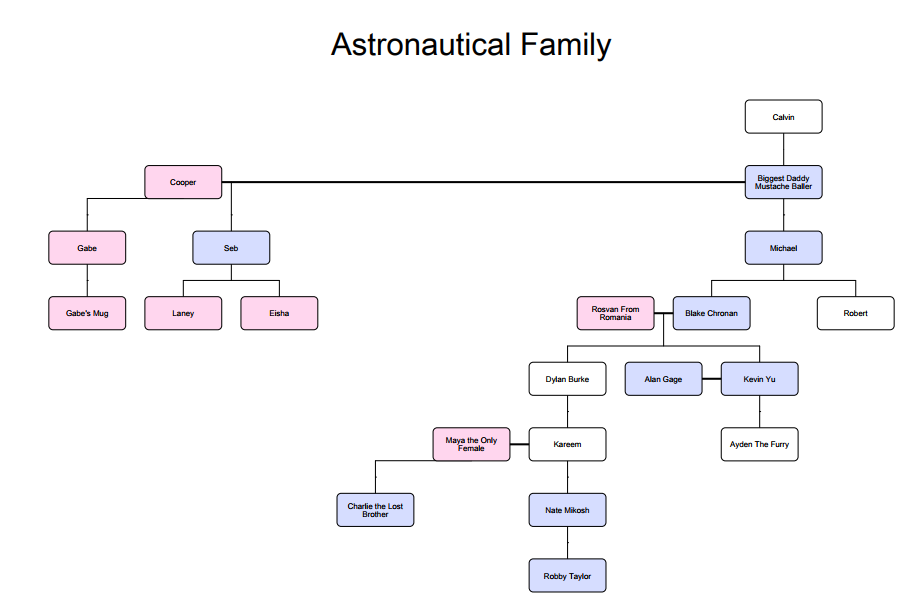 HISTORY OF THE LIT FAM

Calvin is the leader of the family and everyone except Nate Mikosh is from Astronautical engineering. Kareem, Maya, Keven, Seb, Calvin, Biggest Daddy Mustache Baller, Michael all asexually reproduced thanks to the magic of Blake Chronan's icebreaker gum. Noticeable members of the LIT FAM include

He loves him some gum Blake Chronan he loves http://www.tipwiki.net/wiki/TIPlationship

Charlie has a strange background. It all started when Maya (the TA) saw big-bod Kareem. Overloaded with joy after seeing him, they had a kid without realizing that Kareem could only asexually reproduce. 9 months later Charlie was born because of the failed abortion that happened 5 months prior. He was left out in the streets of Houston where the queen goddess Blake used his ultra powerful gum to bring him a better life, a life living with wolves. While living with the pack of wolves he saw one that looked odd. It turned out just to be Ayden the furry doing one of his shenanigans. Ayden brought Charlie back to the family where he was meet by God himself, Cal. Cal decidedly keep Charlie until he realized that Charlie was his great-great-great-great-great grandson or something like that. Kareem rejected Charlie and was forced to be away from Nate, his brother. Charlie ended up becoming an ERS master except that Blake, Razvan, Cal, Dylan, and Cooper were all better than him