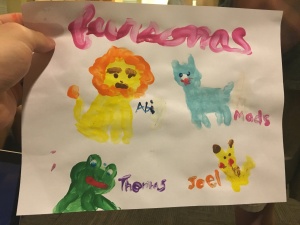 Each member of the group owns a onesie of their wonderful fursona, originally created by the legendary artists Mads and Abby at the finger painting evening activity. Mads and Abby both already owned their onesies, which they both had purchased at (separate) anime conventions prior to TIP. The onesies of Thomas and Joel were both sent to them by Mads, Thomas for the WNAM Halloween gift exchange and Joel for his birthday. Their fursonas are as follows: Abby, a lion; Mads, a blue alpaca; Thomas, a frog; and Joel, a pikachu. No one remembered why Joel's was a pikachu for a while, but then they remembered while writing this page. Joel had mistakenly told the group that his dad owned a pikachu onesie, so they made his fursona a pikachu to make the obtaining of a onesie easier.

The FTI group was originally started because Mads was 100% done with third-wheeling with Thomas and Abby. She made a new group chat for the friend group, this time including Joel, because he's cool.

The furry jokes probably first began after Zootopia showing on the first Saturday of West Term 1 2016. Abby wore a lion onesie and knew some of the words to the song Try Everything at the end of the movie. Thus marked the beginning of the relentless furry jokes. For whatever reason, all of the members began to take a furry quiz, which Mads initially refused to do because she is not a furry. When she finally gave in and took it, Abby claimed that she (Mads) was now a furry in the group chat, which sparked the argument that caused Joel to name the group.

Since then, the iMessage chat has died and been replaced by a new GroupMe because SOMEBODY just had to get a nerd phone (Thomas).