Jolly Jordan Juice (also known as Triple J) is a concoction made by Jordan Robinson, an RC at Duke East. Originally called just "Jordan Juice", it was popularized by the kids in his 2014 Term 1 RAG, and is a mixture of Blue Powerade, Orange Juice, and Sprite, along with Pure Deliciousness.

Depending on the ratio of the three ingredients, Jolly Jordan Juice can turn out from an opaque pale green to a translucent turquoise. An alternate recipe involves substituting the Orange Juice and Sprite for Mello Yello (this version is used in the RC Exorcism during Term 1) 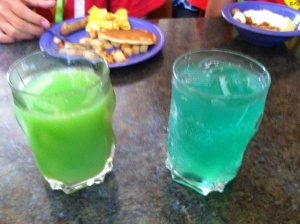