Mary Matias is an iconic QUEEN (and a member of Alexis' RC Group). She is known best for her amazing dance moves, including the "Mary dance", which was taught to her RC group. Mary is known also for saying the most random things at the most random times (such as "I think I'm actually going to combust") She began the RC group tradition of saying "who approaches on our horizon?" when someone is coming around the corner. Her catchphrase is "that's unfortunate", which is also said at the most random times. 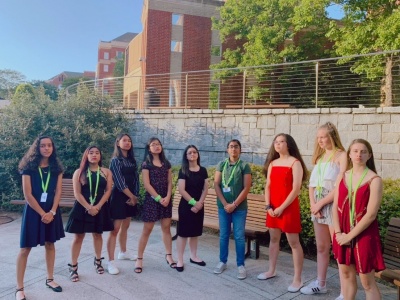 Mary with RC group friends posing as white boys for a prom photo.

Mary was the most sus and crackheaded member of RC Anna's Guardians of the Galaxy at Georgia Tech Term 2 2019, where she was enrolled in Neuroscience. She brought lots of laughter with her everywhere she went and greatly contributed to the group's crackhead energy. She ate at least three bananas every day. She had a habit of spilling her drink at every meal, leading to "Mary's Spilling Curse", unfortunately it also spread to other members of the group. Mary was also the creator of the "Head Wall Dance, in which one puts the crown of their head on the wall and spins around in a passionate, almost desperate manner. She spent a lot of time being sus on the 2nd floor and passing it off as a social experiment. She infamously did the Worm during the group's TiPSync performance. Mary was one of the best dancers in the group and popped off at every dance. She and Erin Yoon performed an epic dance sequence at the Talent Show. Mary absolutely loves boba and often orders 5 or more milk teas at a time.

Iconic quote: "It's crackhead hours, yo"