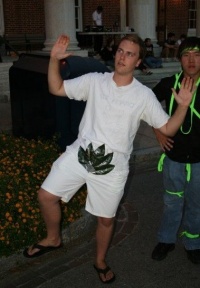 Peter Sloan was an RC at Duke East, famously self-attributed as a person who "may or may not have been a participant in the Duke Talent Identification Program at some point or series of points in the past." However, it has been discovered that Peter Sloan is a four-year former Term 2 TIPster who attended TIP from 2001 to 2004. He worked as an RC at East from 2007 until 2010, when he became the TA for Philosophy of Time (Term 1) and Bach to Rock (Term 2). As of 2009, he is 21. He attends the University of Alabama and graduates in 2010.

Along with former-TA/APA and all around TIP staffer extraordinaire Will Harris, Peter is one of the most well-versed sages in the history, intricacies, legends, and traditions of the program.

He used his RPS fire in a match to convince someone (Mike Sori) to go to Cosmic Cantina with him.

Sometime during East I 2008, Peter claimed that his family owned the Sloan toilet company. Thankfully, this was quickly proven false. The godly name of Peter Sloan should not be desecrated by such low, earthly objects such as urinals.

As of around 2015, Peter Sloan was teaching at TiP. He taught the class Mind Labs and was increasingly angry about the way TiP was run on the down low. By down low I mean he made some shady facebook posts about finances and the main staff. By the end of 2016, he decided to never return to work for TiP due to disappointed. Some fun facts about adult peter: He's has an Instagram for his cats, his wife/girlfriend? is a lawyer, has lowkey a feminist communist (iconic), and hes the nicest man ive ever met.

The Mandate of Heaven

On July 22, 2009 at East Term II, Peter ROSHD against Will Harris for The Mandate of Heaven. Signs were posted in every dorm and common room, telling of this epic battle that was to take place in front of B. Duke at 4:08, but due to the announcement that Term II was cancelled, Peter and Will were forced to ROSH in the Marketplace in front of the entire camp (who had gathered to be told officially that East Term II was terminated). Peter and Will had planned to ROSH in private, and whoever won that match was to win in the choreographed public match. Again, due to the imminent closing of the camp, Will and Peter did not have time to choreograph such an occurrence and so the ROSHing in the Marketplace was in fact live. They both opened with the honorary rocks, and for the next two throws, they both threw rock as well. It was at this time that Will threw a paper to defeat Peter's rock, and it seemed that Will was sure to win. Peter then threw a scissors to defeat Will's paper, and it was tied again. With the tension mounting, they both threw their respective throws and alas! Will's rock was defeated by Peter's paper.

and so Peter Sloan had won The Mandate of Heaven.

Peter Sloan indicated upon questioning at the TiP Lore event of Duke East Term 1 2009 that he, in fact, knew what rules where established precisely the year after he left and that he was the cause of them, he also stated that he would tell any TiPster that asked him in person on the 5th of July the day after term ended and all TiPsters left what these cruel rules were and the exact actions that he had taken in order for the TiP Law to be instated. When several TiPsters contacted him to ask what he did, Peter did not respond.

July 3rd, 2009 Term 1 East Peter Sloan did not give a kiss on the cheek to a TiPster. It was after the Talent Show and is often regarded by Peter as a moment of, "I don't know what came over me..." Seeing as how a 23 year old RC was caught making out with a 13 year old TiPster a week before the incident (at Davidson), the new rule will be created for the past incident and should not be confused as a measure against this harmless gesture.

Also, the TIPwiki does not exist.

During Term 2, a war message reportedly from RevT (although it was later discovered that none of the class knew anything about it) regarding the ultimate tournament was written in Peter's Bach to Rock class. It was found by Peter and two students that were coming back to retrieve their lanyards. In response, they wrote a comeback in RevT's class. When they came back and saw the message, and a few TiPsters in RevT drew a picture of Peter`s severed head, taped it to a stick, wrote "Peter Sloan`s blood will water the furrows of our field" (a reference to the French National Anthem, which they had heard in class that day), and left it in Peter`s chair during a break. When Peter and his class returned to their classroom, he stuck the stick in the trashcan and denied its existence. Everyone saw the message on the board though, and thus forth an epic love-hate relationship was born between B2R and RevT.

Peter was a teacher like no other. We learned of Butt-shapedness and it became somewhat of an obsession for the class. He made some interesting choices with his movies that we were shown but overall they were at least weird enough to be entertaining. Peter taught us more than any other teacher that I have had at TiP and I still use stuff from his class in my college philosophy course. His wife (then girlfriend) was also super cool and he had her come in and talk to us, and criminal minds one time. He also owns many cats and showed us them. The catgram is @norealpets