This class was a legend. 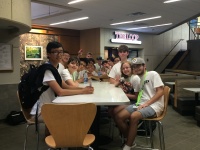 Programming for Video Games West Term 1 2016 was a legendary class full of game reviews and memey goodness. The course was taught using Unity and C#, and the class made their own games in small groups. All genres were welcome; examples of games include a horror game and an 8-bit style 2D adventure game.

Every other day, the class would play a game to review it and look at what made it a good or bad game, and what they could incorporate from them into their own games. The first game was Stanley Parable, which spawned a meme of spamming " The end is never The end is never The end is never" etc into various chats that were used by the class. Another notable game was The Beginner's Guide, which caused severe trauma and most of the class to need therapy. They also played Town of Salem as a class online, which was legendary, and spawned various memes, such as "Very Good" and "Crops."

The class also played Portal, Transistor, Limbo (which gave Owen arachnophobia), Ori and the Blind Forest, and a few other games.

During games of Town of Salem, people (namely Eugene and Jake) would enter with the name "Thank You" or and spam their namesake phrases as another allusion to Dark Souls. They ruined the dead chat for any poor, unsuspecting medium many a time.

Honestly, the class just loved talking about Keemstar. Keemstar is ridiculous (and not in a good way).

The whole class loved Cowboy Bebop. It's a mystery as to why. It was probably because of nyooooom dog.

Instead of working on the tutorial project, several students (namely Will) would play Cookie Clicker or .io games (such as Agario or Slitherio). This resulted in many half-done tutorial projects. We're sorry.

Eugene the TA introduced this meme by spamming things about crops, such as "Didn't even have any crops" or "You can't even eat without crops" as an allusion to a Dark Souls video. The phrases became a meme among the class, as they would shout these things to each other frequently.

The End is Never

Jake began spamming The end is never into group chats and in-game chats after the phrase appeared on The Stanley Parable loading screen. He would frequently enter games of Cards and of Town of Salem named "The End is Never" or "The_End_Is_Never."

Eugene the TA loved failing students. When students did or said anything memey or cringey, Eugene would yell that he was "failing" them, as an allusion to the general pass/fail grading system within TiP. No one would actually fail the class.

Jake and Michael both spammed the Bee Movie script into several chats and games. It was ridiculous.

Every day while walking to the Sanford Building, the class passed through the Bryan Center. Evidently, a cat lives behind the Bryan Center. Max wanted to domesticate the cat and would stop to take pictures of and approach the cat every single day. There were, in fact, three cats, but the black cat (nicknamed Spoopy) was most commonly there.

The class T-shirt was due in about 45 minutes, and the class hadn't even begun to work on a design. Lydia volunteered to draw a picture to put on the shirts, and Eugene and PT gladly accepted. Lydia drew PT and Eugene as the Mario Brothers to put on the shirt, and Eugene was far from impressed, claiming that himself as Luigi looked like "nightmare fuel." The drawing wasn't digital so it wouldn't make it onto the shirt, but Max outlined the drawing to make it digital so it could be in the Term Book. The class continued talking about the amazing drawing and even had plans to have their own shirts printed of it on Custom Ink or a similar site. 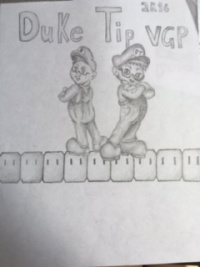 This image has induced nightmares. 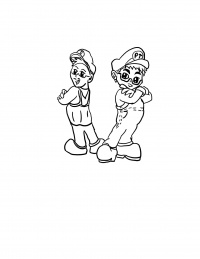 It only got more cringey.
Retrieved from "http://www.tipwiki.net/index.php?title=Programming_for_Video_Games_West_Term_1_2016&oldid=60334"