When speaking of the Staff/Student Game, one must realize it's the Texas version of any sort of TIPster against Staff Ultimate game.

TAMU Term 1 2010 also beat their staff for the first time in Texas TIP history led by the great Luis (most famous Term II TIPster EVER), believe me the staff rubbed that in our faces after our horrific defeat Term II. But great job Luis! -Audrey 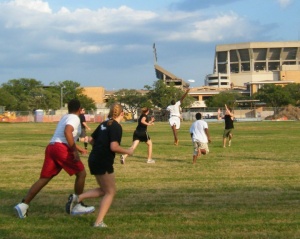 Captained by Brother Koala Kyle, the TIPsters suffered a crushing defeat, even after rallies from the Stacked Team. Kyle played a fair strategy, making sure everyone had playing time who desired to do so. Unfortunately, this was also a weakness, as not everyone is a Ultimate natural. Trying to split up the talent, some teams were exploited for their less experienced campers. After realizing the need to get points on the board quick, the Stacked Team was born. Although the players who were involved could have made two teams, the best TIPsters were assembled. (Roster later) Seeing the success of this group, the strategy of any future captain is to convince those who aren't up to snuff, to please make it easier and opt out of competing. We're smart people, we can make a winning team every year.

History of the game

1The student win debated by staff, but Cameron stepped in and concluded student win. Final catch was a diving grab by Chris Gouin.
2The staff decided to call off the tourney (students-students and students-staff) 90 minutes before it was scheduled to begin due to rain. As it was the third week, there was apparently no hope of rescheduling, to the grievous cries of nearly the entire camp. Many angry comments resulted from this.
3The game started with two quick scored by the students, but it then started to rain. The game was planned to be resumed during quadfest, but the students and staff were too tired to restart the game. This led to a game of Dream Team vs. Watercolors where Dream Team won 8-3.

In 2019, at Duke East Term 1, we finally had a staff v student game after so many years of raining!