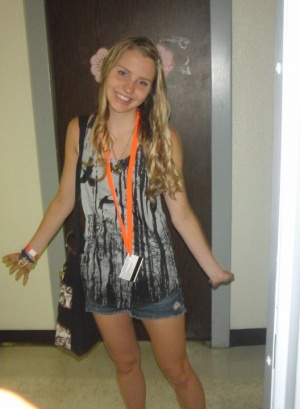 Believed by many TIPsters to be a 4th year 4th year for extensive knowledge of the A&M campus and enthusiastic TIPness. Sadly, Audrey was only a 2nd year 4th year, but she turned out to be one of the most TIPpish of all TIPsters. with an incredible ability to memorize just about everything ever posted on TIPwiki.

During her 4th year she brought an entire suitcase full of costumes, face paint, and spray in hair dye for any and all TIPsters to use at leisure. Naturally she never missed an opportunity to dress up for any TIP event, and encouraged many TIPsters to take advantage of face paint. She insisted that her Ag Fest Team (White Team) wear it, and the Student Ultimate Team.

Audrey's room was a hotspot for TIPsters to acquire Cheez-its, Twizzlers and Fuze Fruit Drinks (Except Banana Colada ones because those are her favorite). She insisted that nobody pay her for eating her junk food and became rather furious at Jonathan when he did. Several attempts were made at sneaking the money back to him, all failed.

Accomplishments while at TIP include: Signer of the petition keeping 4th Year Will privileges, Instigator of TAMU's first Fort Friday, Teacher of "The Hand Game" and "The Cinnamon Roll Hug", Longest Girls 4th Year Will, 3 day reign of being undefeated at ERS, Hostess of 2010 3rd Floor Dance Parties, and Author of "TAMU Edition of YKY@NCW Jokes" and "100 Reasons Why Duke TIP Should be a Boarding School".

Sorry To Interrupt Your Flirting

In 2010 instead of drawings and artwork, Audrey's Dorm Door was covered in TIPjokes and Quotes from events happening throughout the Term. The first quote to be posted was put up in mockery of the most disliked RC of Term II 2010, for her interruption of an ERS Game between herself, Taylor and Caleb in which the RC stated "Sorry to Interrupt your Flirting". Every TIPster within earshot of this remark was offended, especially Taylor who responded with "I have a BOYFRIEND!", the incident at dinner that day was later used during Evening Activity as the plot for Audrey, Ellie and Rachel's Sock Puppet Show of "NO FUN" show. 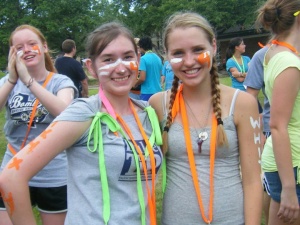 Rachel and Audrey during Ag Fest.

In a RelationTIP with Hunter, Term II 2010

Niki and Jeneane a.k.a. BFFLE's a.k.a. Best Friends For Like EVER

BFFLE from Nikki and Jeneane

There is a curse on Audrey's Left foot. It is always the foot that is stomped on, stubbed, smashed, stepped on, tripped on, basically any injury that can occur to a foot happens to it.

In 2009 while walking from the game to the Texas A&M Bonfire Memorial, her unbiological Twin Kat stepped on the back of her flip-flop that cut into her skin and made it unable for her to walk for the remainder of the evening without the assistance of others. Richard and Hunter acted as her crutches until RC's chased them off and the task fell to Kat.

In 2010 during the while walking to the office, she slipped on an green mint oreo smoothie spilled by an unknown second year, and was unable to walk again. Hunter and Unyime became her crutches and helped her get to Denney's for the traditional 4th year's 1 a.m. breakfast.

Her Twin, Kat, left her an un-injurable left foot in her will :)

Audrey is now at KUs campus as a beloved RC of the 4th floor. She took pictures of every event and led us to victory at the Scavenger hunt and Swampfest. Audrey decorated our floor with creative posters that we all loved! She let us use her costumes supplies when ever we need them too. She was an amazing RC who was kind and full of sparkles! I was lucky to have her as a RC and will miss her!

Audrey or as we like to call her Mommy was one of the best RC's i have ever had!. She was kind, a leader, and a role model, she has inspired me to be an RC and every guy in her RAG in 2014 is very thankful to have had her for an RC. We love you Mommy! Even Chandler although he is a Mizzou fan.