The Basement Floor is a social group that started at Davidson term two of 2015. It is composed of Alex's RC Group (Bennett, Josh, Paul, Scott, Jack, William, Daniel, Will, Joaquin, and Adam), Elizabeth, Izzy, and Mira. Other members include Emily and Ryley. A branch of The Basement Floor is the Bro Code, being founded by Alex's RC Group. Although 2015 Term 2 is over, the members of The Basement Floor are using their group chat to find out what university they will all (more or less) be attending in 2016. Disclaimer: must be a university that has both terms or Term 2 only because Joaquin lives in Peru, and he still has school during Term 1 (Marine Lab is ruled out).

These events are in no particular order

These names are in alphabetical order, not in the order of initiation into the group

If any music is spelled incorrectly, has an incorrect link, or the name is wrong altogether, feel free to correct it

**IF YOU KNOW OF ANY MUSIC THAT THE BASEMENT FLOOR LISTENED TO TOGETHER, PUT IT HERE**

After Davidson, The Basement Floor still thrives as a social group. But TIPression also creeps in ...

TIPression is the post-TIP sadness* that [most] TIPsters feel after they get home and realize they may never see their close friends again. TIPression for The Basement Floor is easier because they have a group chat and they plan on going to the same university for 2016. These are the members that suffered from TIPression:

Disclaimer: In some cases, these treatments can worsen TIPression. Proceed with caution when carrying out treatment.

Basically, TIPression was (correction: IS; TIPression never truly goes away.) present in [almost**] all members.

*The person who made this page (/William) was in Psychology and that class is very sensitive to people throwing around phrases like "depression" or "OCD." Therefore, the creator of this page tweaked the definition.

**Will liked TIP but was ready to leave on the last day.

Oh man, how can I even begin to explain this complex series of radio waves and ones and zeros and inside jokes ...? Yeah, okay let's be real, it's just like any other group text that you might see. The only difference is the involvement of TIP.

Alright, so as the tale of TIPression goes, everyone's sad about leaving TIP. Tears. Constant Snapchat and Instagram (and for you alumni from years before Insta, Facebook) refreshments. Listening to TIP songs to the point where you go crazy (and your family tries to kill you/sing along and ruin the emotion), All that stuff. Most of us (not including current TIPsters in the program at this very moment) have all experienced TIPression. Because of this we all know that the number one form of communication between TIPsters is basic SMS/iMessage. So, of course, we all got each others numbers by making a group text to basically talk about everyday life with references to TIP. 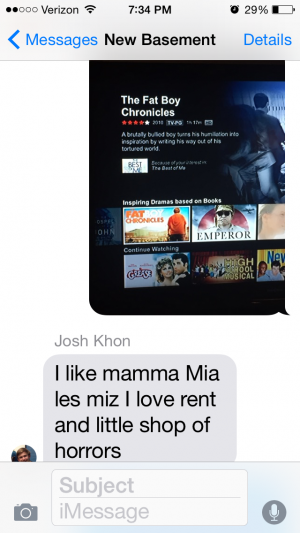 Okay, just because TIP 2015 Term 2 at Davidson is over, it doesn't mean that we've stopped announcing our achievements and key moments to the world of TIPsters. This page's purpose is to post any announcement a Basement Floor member has to make.

HERE ARE THE ANNOUNCEMENTS!