The dining hall at Davidson. It is all you can eat. It is located right behind Belk Residence Hall. The dining hall at Davidson is very nice. You can enter in from two doors on either side of the building. After going in, you are asked to leave all bags and water bottles on a floor before going downstairs to the dining hall. The room is very airy and has high ceilings. Upon entering, you can look down at all the people eating from upstairs, but beware! If you do so too long RCs will scream at you. On the left side of Vail, there are circular tables with around 8-10 chairs each (my group managed to fit all 10 of us plus our RC at every dinner!), and lining the glass walls are higher tables with 3 to 4 chairs each. Usually, TIPsters take over the left side, until the last day when there is no one. On the right side, there are long rectangular tables usually housing the Sports Camp Kids and other visitors. After going down the stairs, there is a small whiteboard or a large television telling you what there is to eat that day. There are usually three lines offering a wide variety to eat. Of course, potatoes are always served much to the delight of the Potato Queen (Aisha).

The first two days, you are required to go to breakfast with your RC group. After that, breakfast is optional and you can go anytime between 7:45 am and 8:30 am. You can eat lunch with whoever from TIP, though many eat with some classmates. You eat dinner with your RC group.

Basically, whenever you go to Vail you try to fit as many people into a table as humanly possible. The normal amount is 8. Well about half way through Term 1 2012 at Davidson we got 12 people into a table. Soon after we broke the record again with 13. It remained at 13 until the end of the last week when the record was again shattered and immortalized. This is the tale of the sacred 13:

Once upon a time in the era of term one 2012 at Davidson. There were a number of intrepid TIPsters. They slowly filled up one of the circular tables at Vail attempting to first break the record then to DOUBLE the capacity of a normal table. The shouts could be heard from around Vail as their number slowly grew. Finally 15 TIPsters were sitting at the table and the 16th had gotten up to get more food. When the fifteen were seated the evil(RHL) approach and said "You have almost doubled the amount of a regular table." This was met by loud cries of "WE KNOW!!" The TIPsters continued sitting as the evil RHL continued to lecture, saying "Divide!" As any TIPster passed the table they were yelled at to SIT!! However no one sat until the 16th came back with a plate of food. The 15 yelled at him frantically to sit as the evil RHL sent a death glare and continued yelling "DIVIDE!" until the final TIPster sat. Then a cheer arose from that corner of Vail and the adventurous explorers dispersed and told their tale for all to hear. The 16 were forever immortalized as the only ones to double the capacity at a table. Joseph even scratched "The 16" and the date into the table with his key. Joseph and his infinite wisdom.

The 16 Immortals (Have Been Challenged! See details below.)

Disclaimer: the people who broke this record (The Basement Floor and their friends/2015 Term 2) have no bias against the original 16 immortals (In fact, the only person in our group who ever does stuff outside of RelationTIP and our social group/cult page is me. None of the people in The Basement Floor will know about this page until I am done editing). We have no means of contact with any of the original 16 immortals or any 2012 TIPster (Term 1 or 2), except for this page's Discussion. Any exceptions to this disclaimer (including contact with a 2012 TIPster after seeing this page) is completely coincidental and should not be counted as a lie against this disclaimer. Read on, enjoy, and don't sue. 😊 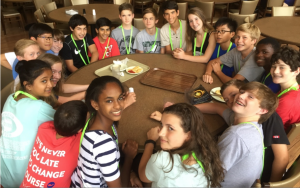 The Basement Floor (and some of their friends) broke the record for most people seated at a round table (16) by four (20, in case you're not a math whiz).

Once upon a time in the era of 2015 Term 2 at Davidson, there lived all the members of The Basement Floor (oh, yeah, and their friends). One day Sean* told Bennett the record for the most people at a table was 16**. With a record breaking mindset, Bennett told the basement floor his plan: *CENSORED* (Sorry, this is for The Basement Floor and their friends to know only) Originally, the plan was to break the record during breakfast on the last day since all the members of The Basement Floor would be present, but on the day before the last day Bennett said that since a lot of people were already at the table we should just do it now. [most of] The Basement Floor came to the table with a bunch of friends and they all sat down. The last person tried to sit down but since he was a last minute extra there were some technical problems (no specifics, because it could lead to finding out our methods. Again, only The Basement Floor should know these methods) they had to work out. Eventually, David, the RC*** started yelling at them to sit down. Luckily, The Basement Floor's official RC****, Alex, was an RC that let many things slide***** and so they got everything situated. Geoffrey sat down. THEY [WE] BEAT THE RECORD BY FOUR!!! 20 PEOPLE!!!****** As you saw in the picture on The Basement Floor's home page (you did read the home page, right?), everyone was very satisfied to help break the record. Here are their names:

And that is the story of The New Immortals.

A message from the elder Immortals:

You guys did well. I'm glad to see that our record was broken, and ironically at the end of our time at tip(most of us were first years, and you all broke it in our 4th years.) I hope your record stands for a while, and I congratulate each of you. Sincerely,

A message from the creator of this section:

Thank you, Max. Although my page is not yet created here is the link for future reference: /William. Sincerely, William (First time using my real name on Tipwiki)

*The most awesomest, annoyingly arrogant RHL/RC. Did I mention big time button/pin master? No. Did I mention he was the leader of every single Summerfest team he was on known to man? NO!!!

**[most of] The Basement Floor had been sitting together at breakfast for quite some time now. There were many other people who came to visit the table and Bennett was curious as to how many people could fit at a round table.

*****If any Duke TIP staff member visits this page, you saw nothing, and every rule was by the book.

Ah, the thing that makes Commons Commons: The Food. The food in Commons ranges from slightly edible to horribly disgusting to deliciously delicious.

Breakfast usually isn't so bad, but the waffle sticks are hard as rocks. The french toast is pretty good, and of course they always have a wide range of cereal options and some form of potatoes. The potatoes (in any form) will likely be eaten by Aisha, the potato queen, at least twice per meal.

Lunch can be edible, but most tipsters usually stick with pizza, burgers, or sandwiches.(One day, I found a piece of string in my pizza, so make sure there are no foreign objects in your food before eating!!!) The wraps are supermegafoxyawesomehot but don't rape them ... (cough) ...Yasmine. Also, dessert is a must. The sweets in Commons are sublime (as proven by Mira Thakur/2015 Term 2). An ice cream freezer, cookies, cake, BANANA PUDDING, cobblers, scoopies, and more!

Dinner is usually okay, and if it's not the desert makes everything better. (either way, though; the dessert rocks.)

As for drinks; stick to Cheerwine and avoid the blue Powerade ... (cough) ... Joseph. Also, try this new drink called Toxic Yellow. It's 35% Powerade and 65% Mellow Yellow. It makes even the sanest people go crazy.<--So True