Dan Weitzman, the first wearer of the hat, pictured wearing it in 2009

The Fourth Year Hat is a longstanding UGA Term 2 tradition, dating back to the campus' origin in 2009.

The story goes, (and this is from a bad memory of a retelling, please correct me if this is wrong) there was a tipster named Dan who wore a hat every day during his time at TIP. However, one fateful day he lost his hat, so one of his friends bought him a new hat. At the end of the term, he wrapped his lanyard around it and passed it onto a third year. The tradition of passing it down to a tipster who is the embodiment of TIP survives to this day.

There is no required amount of times the hat needs to be worn; many have worn it every day of TIP while others have chosen to only wear it during special days, such as Arrival Day, Staff vs. Student Frisbee, and TIPProm.

It should be noted that though Dan was the originator for the tradition, Anthony Gagliardi was the tipster that propelled the significance of the Hat to its position today to the point where the wearer of the Hat is traditionally looked toward as the unofficial role model for his or her fellow tipsters. 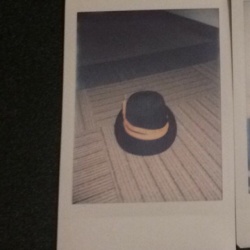 Wearers of the Hat